Meet Me in Paradise by Libby Hubscher: If fantasizing about future paradise travel destinations is one 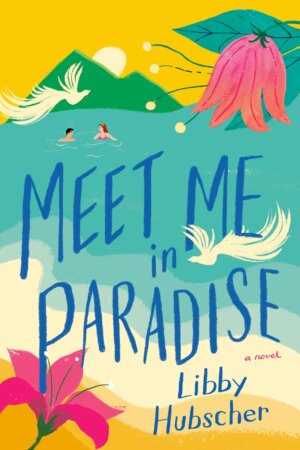 of those things that have helped you get through these past 12 months, then this is definitely the book for you. And then layer on a neat mixture of earthy warmth, unbreakable sister bonds, and an adventure packed romance, and you’ve landed a wonderful combo that will break and make your heart in a beat.

Set on the gorgeous Caribbean Island of Saba, we begin with a slightly cliched plane ride wherein Marin, our discover thyself Diva, is forced to face her flying anxiety head on as the plane ventures into a dangerous storm and thus, some terrifying turbulence. Landing literally in the lap of broody Lucas Tsai, Marin is somewhat relieved to discover he is all action and style, and by all accounts a prominent business owner who happens to own a huge boat to get them to the island. This is particularly important after Marin realises that she has been stood up by her sister Sadie who had suggested and planned their Sister-bonding tropical retreat, and thus, Marin faces the reality of proceeding solo.

What’s clearly a set-up from the beginning, morphs into a wild adventure whereby Sadie holds Marin’s passport ransom in a selfless betrayal to force Marin out of her comfort zone and indeed, force her to live presently and deeply in the here and now.

Naturally, gut wrenching tragedy strikes, and whilst it was foreshadowed through some of the early motivations, it managed to suck the wind out of all sails and challenge any cynical reader to remain dry-eyed. Before long, the slightly unrealistic and clichéd beginning transforms into a powerful love letter to sisters everywhere – for their shared loyalty, their implicit comfort and endless unconditional love that will speak to any woman who is lucky enough to have a female sibling. Somehow, in spite of the devastating tragedy that unfolds, there were moments throughout that were incredibly uplifting and inspired, and times when tears of sadness rapidly turned into tears of joy. For the most part, this was due to Sadie’s characterisation, and in many ways, I wish we knew her better prior to Saba.

The dialogue, banter and chemistry that existed between Sadie and pretty much every other character worked a treat and it served to contrast against Marin who was relatively wooden and at times two dimensional. Thematically however, this duality mostly worked as it was able to pay homage to sibling differences and similarities, and that despite this, true sisterhood is an unbreakable force.

Overall, Meet Me in Paradise will find a way to pluck everyone’s heart strings. And whilst the tragedy throughout maybe triggering for some who have lost their sisters far too young, it will also empower all women to ensure their individual identity is intact and that family complexity and dynamics are viewed as enriching – for our lives would be dull and loveless without them.

Ever since her journalist mother died on assignment, Marin has played it safe, refusing to set foot outside the state of Tennessee. Her wild-child younger sister, Sadie, has trotted the globe as a photographer, living off of art and adrenaline.

When Sadie returns from a tough assignment abroad and looks a little worse for wear, Marin reluctantly agrees to a sisters’ spa weekend on the tropical island of Saba. But her lifelong fear of travel is affirmed when Sadie misses the flight, Marin’s luggage gets mixed up with another passenger’s, and an episode of turbulence sends her hurtling into the lap of Lucas Tsai, the handsome stranger who stole her sister’s seat.

For the first time in a long time, Marin has to step outside of her comfort zone as she explores the island with Lucas and learns what she’s been missing out on. With each breathtaking new experience, Marin gets closer to her real self, the man she’s falling for, and the heart-wrenching truth about why she’s there in the first place.