Today it is my pleasure to Welcome author Caridad Pineiro to HJ!

Hi Caridad and welcome to HJ! We’re so excited to chat with you about your new release, Cold Case Reopened!

Welcome to HJ and thank you for coming by to find out more about my new release! 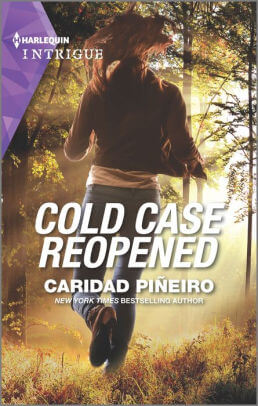 This is my very first book for Harlequin Intrigue and it has one of my favorite topics: a cold case! The heroine is Rhea Reilly whose twin sister Selene disappeared six months earlier. Rhea is convinced that the Colorado authorities have given up on finding out the truth about her twin’s disappearance and has been doing her own investigation into what happens. She manages to convince police detective Jackson Whitaker to reopen the case based on the evidence even though doing so may risk his career. What follows is a page turner as Rhea and Jackson track down the truth and also fight their growing attraction!

“You should be more careful and check to see who it is before you open the door.”
Anger ignited instantly at his chastisement. “I was expecting room service. Not the police.”

It was hard to believe that such beauty possibly held unspeakable evil.
Rhea Reilly stood on the shore of the mountain lake where six months earlier her twin sister, Selene, had disappeared on a cold fall night.

Determined,” he said, the latter word followed by a playful chuckle.
She considered him over the lip of the glass, thinking about how to answer. After a pause, she said, “I know some people think artists can be temperamental and flighty. You probably did.”
He smiled as he scraped the last of his pie from the plate and then licked the fork clean. “I plead the fifth,” he joked, but then quickly added, “But you probably thought I was uptight and by-the-book.”
She felt the urge to shake him up a little. “I still do, but I look forward to you proving me wrong.”

I watch a lot of true crime shows and when I was asked by the editor to dream up a cold case story, I wracked my brains for ideas from so many cases that I’d watched and tried to put together a story that would keep people turning pages as they try to figure out who did it along with the hero and heroine! I also tried to give readers a big surprise at the end of the story.

I always work up a character sketch before I start the story. I give them a job, birthday, and other details and try to know them before I write. That helps a lot, but yeah, they do surprise me at times! In this story, it was a surprise to see how Rhea slowly falls for a man who is nothing like what she’s used to and that was a lot of fun.

My favorite scene to write was the first meeting between Rhea and Jackson. It’s one that didn’t necessarily start off well and which laid out what the conflict would be immediately: Jackson believing they made the right decision about Rhea’s twin’s disappearance and Rhea dropping a big bomb, namely, that she still thinks her sister Selene is alive!

I think the hardest scene to write was one where Rhea, Jackson, and one of Jackson’s friends visit a location to try and locate Selene’s body. Jackson is concerned about how it will affect Rhea, especially since he is beginning to have feelings for Rhea and wants to protect her. Here is a little snippet from that scene:

THEY HIKED BENEATH the rising wall of the ridge for close to an hour, Jackson ahead of her, hacking through vines and thick underbrush. Yards behind her, his friend Diego gave the dogs free rein to check the area for signs of any decomposition. For signs of Selene. They didn’t hit on anything, which was both a disappointment and a relief.
Sweat dripped down the middle of her back, and her temples from the heat and humidity in the forest. Sweat lines were visible down Jackson’s back and armpits as he cut their way through the forest. In another half an hour, they finally reached a spot directly beneath the building location.
Jackson stopped, sucked in a deep breath and wiped away sweat with a muscled forearm. He shot a quick look at her. “You okay?”
Her legs were trembling, she was a little out of breath and a lot hot, but she shook her head and said, “I’m okay.”
Jackson peered over her shoulder at Diego. “How about you, amigo?”
Diego smiled. “A walk in the park,” he teased. With a hand signal, he set the dogs into action. They scurried into the nearby woods, sniffing here and there, jumping over fallen logs and beneath tangled vines. As time passed, it was clear they weren’t hitting on anything.
With a low whistle, Diego summoned the dogs back. “Nada here. Maybe we should press on a little more.”
Jackson sighed and looked at her. “You okay with that?”
“I’m ready to do anything we need to do.” She was determined not to waste this opportunity.
They pushed on, and then in an even wider circle in the area closest to the custom home’s location up on the ridge.
But despite all their hard work in clearing the underbrush and hiking through the rough terrain, the dogs failed to locate anything.
It was impossible for Jackson not to see the mixed emotions spiraling through Rhea. Despair. Relief. Disappointment. Hope.
He laid an arm around her shoulders and drew her near. Brushing a kiss on her temple and ignoring Diego’s surprised look, he said, “Don’t let this get you down. We’ll find her.”
She turned into him and murmured, “It’s just…I don’t know. I’m upset, but also relieved, you know.”
He knew, boy did he know. “Let’s go grab a bite and regroup. Decide what else we have to do in Avalon before heading home.”
Home. His cabin had always felt like home, but with Rhea there now it felt more…complete, worrying him.
It was too much, too soon and, as Diego shot him another questioning look, he realized his friend was likewise wondering what was up.
Rhea nodded, and he released her so they could trudge back through the path they had blazed earlier. By the time they reached their cars, his entire body was bathed in sweat, and his arm was beginning to ache from swinging the machete to cut through the underbrush.
At his cruiser, Rhea stopped and offered a smile to Diego. “Thank you so much for doing this. We really appreciate your help.”
“Anything for an old friend,” Diego said and clapped Jackson on the back. Maybe a little too hard, Jackson thought and grimaced as pain swept across his lower back.
“We do appreciate it, amigo,” Jackson said, but sensed his friend wanted a private moment. Especially when Diego jerked his head in the direction of his pickup.
He got Rhea settled in the cruiser. “I’ll be back in a second.”
She nodded, and he joined his friend as Diego rewarded his dogs and then loaded them into their boxes.
With a quick glance in Rhea’s direction, Diego said in a low whisper, “Do you know what you’re doing?”
Jackson didn’t dare look toward Rhea, afraid he’d reveal too much. He also wasn’t sure what to tell his friend. “I know we’re trying to investigate her sister’s disappearance.”
“But that’s not all, Jax. It’s obvious you have feelings for her,” Diego said and finished securing the latches on the dog boxes. He leaned on the tailgate. “Is that going to compromise your investigation?”
“No. I won’t let whatever is happening between us change what I have to do.”
Diego arched a brow. “Which is?”
“Find out what really happened to Selene Reilly.”

I’ve written in quote a number of different romance genres, but I think that Cold Case Reopened showcases my writing style in the romantic suspense genre. There is action, mystery, but also lots of emotion and romance as well as characters that you feel as if they are almost real people.

I would love for people to take away the power of love, sisterhood, and having faith. That’s the biggest takeaway from Cold Case Reopened.

I am currently working on another Harlequin Intrigue titled Trapping the Terrorist which will be out in October 2021. In late May I have a release from Hallmark titled South Beach Love which is a fun story about two chefs who end up in an unexpected competition at the same time that they are falling in love. I also have a women’s fiction book for Sourcebooks in 2022.In the meantime, I’m working on various projects that I hope to sell and also re-releasing the books in The Calling is Reborn Vampire Suspense series!

Giveaway: I’m so excited to be doing a giveaway! One lucky winner will get a $15 gift card to the retailer of their choice!

To enter Giveaway: Please complete the Rafflecopter form and Post a comment to this Q: I am addicted to true crime and cold case shows! How about you? Do you love those kinds of shows and stories?

They are on a cold trail

And running out of time.

Rhea Reilly is certain her twin sister’s sudden disappearance six months ago wasn’t a suicide, no matter what Colorado authorities think. She can’t afford to trust police detective Jackson Whitaker—even if he’s risking his career to uncover the truth. But a lethal trail of lies is drawing them together…and into an inescapable trap.

Caridad Pineiro is a transplanted Long Island girl who has fallen in love with the Jersey Shore. When Caridad isn’t taking long strolls along the boardwalk, she’s also a NY Times and USA Today bestselling author with over a million romance novels sold worldwide. Caridad is passionate about writing and helping others explore and develop their skills as writers. She is a founding member of the Liberty States Fiction Writers and has presented workshops at the RT Book Club Convention, Romance Writers of America National Conference as well as various writing organizations throughout the country. You can connect with Caridad at www.caridad.com.
Website | Facebook | Twitter | Instagram | GoodReads |