For All She Knows by Jamie Beck: As both a stand alone and as the third book in the Potomac Point 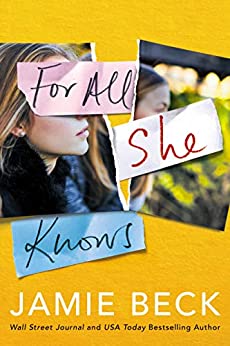 series, For All She knows presents an evolving moral dilemma that will squeeze any beating heart, and successfully highlight the very fine line between seeking justice and wanting revenge. As a series of random decisions pave the way for tragedy to strike, perfect nuclear family, Grace, Sam, Carter and Kim slowly fall apart as they come to terms with an entirely preventable accident that transpires because teenage Carter saw an opportunity to go to a party and test his parents trust.

Sadly for all, the accident occurs at Mimi’s house, who is Grace’s best friend, and who has a less conservative approach to parenting, thus becoming the community pariah as a result of the events that unfold. For nearly 20 years, Grace and Mimi have seemingly forged the type of friendship that will stand the test of time, however, when Carter’s future is seriously threatened, Grace’s past regrets rise to the surface threatening everything and everyone she loves.

Initially, Grace presented as the perfect mother, wife and friend; respected by others, working consistently to atone her past failures, and who had the type of life-plan that was admirable if not fairly contrived. Similarly, Sam was presented as the perfect husband; trying his best to walk his wife’s journey, doing his utmost to save his family, and who tried to keep it together as Grace fell further into a pit of blame. For the most part, the couple worked a treat as both of their perspectives were entirely understandable given the horrific circumstance they were dealing with as parents and as prominent members of their community.

With so much focus on the night of the party and who was ultimately responsible for Carter’s accident, however, it came as a massive surprise that the sequence of the night wasn’t described. There was clear mention of harassment and bullying including some shoving that were contributing factors to the outcome, yet no clarifying flashback was afforded. Whilst this was seemingly intentional and likely the point, in the sense that Grace needed to heal without the details, it ultimately became enormously frustrating. Similarly, pacing was hindered by dialogue being over-explained and overly internalised, which was fairly unnecessary as relationships had been clearly established and the key action kernel, including key choices had been appropriately foreshadowed.

Conversely, thematic intent and the ethical conundrum’s were effective, in that there was clear emphasis on the power of forgiveness, and the tension that exists between fate and circumstance. Furthermore, some interesting observations were made regarding the enormous pressure on parenthood, and whilst it was a little prosaic at times, it effectively highlighted that making space for those you love as they come to terms with their own demons, is one of the most powerful acts of love any true friend or family member can demonstrate. Overall, For All She Knows is a squeaky clean family drama that tackles some challenging issues that are relevant, whilst reminding us that everything we love is worth saving.

Two mothers face the consequences of their choices in a gripping novel about friendship, family, and forgiveness by Wall Street Journal and USA Today bestselling author Jamie Beck.

Grace first met Mimi when she blew into their sons’ toddler playgroup like a warm bay breeze that loosened Grace’s tight spaces. Despite differing approaches to life and parenting, the fast friends raised their kids together while cementing a sisterlike bond that neither believed could be broken. But when a string of ill-fated decisions results in a teen party with a tragic outcome for Grace’s son, the friendship is ripped apart and an already-splintered community explodes.

Accusations are leveled, litigation ensues, and the people of Potomac Point take sides, all of which threatens Mimi’s business and her current custody agreement. Her sole salvation is a young cop who just might be her second chance at love. That fact only antagonizes Grace, whose marriage is crumbling beneath the weight of blame and the echo of past mistakes.

With their lives unraveling, the former friends stand to lose everything they love unless they learn to forgive—both themselves and each other.