Today it is my pleasure to Welcome author Jennie Marts to HJ!

Hi Jennie and welcome to HJ! We’re so excited to chat with you about your new release, When a Cowboy Loves a Woman! 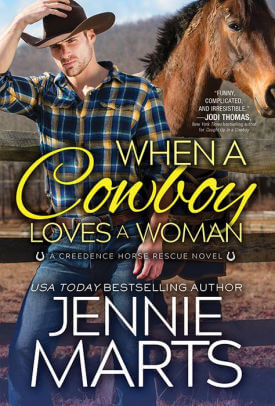 This book is about two widows who find each other and fall in love. But first they have to go through lots of adventures with a spunky ten year old girl, a rescued horse, a pile of abandoned puppies, and lots of other adorable animal antics. But the loss and wounds in the story will tear your heart apart and put it back together again.
When Elle Brooks’ kitchen catches on fire, she lands in the muscled arms of handsome veterinarian, Brody Tate. The fire forces her to move in with her friend, Bryn on the Heaven Can Wait Horse Rescue ranch where she volunteers. Hanging out with the hunky vet and his spunky 10 year old daughter, Mandy, reminds Elle of all she lost in a car crash years ago. But she can’t deny the feelings the hunky doctor is stirring in her.
Brody and Elle both know the pain of losing someone they loved, and neither planned to ever let themselves fall in love again. But fate has a way of stepping in, and what started with a small fire now burns hotter than either one could imagine. Two wounded souls must risk their hearts or else the fear of loss will keep them from ever finding happiness again.

His hands still cupped her face as he drew back, his teeth playfully dragging at her lower lip in a move that had tingles of pleasures zinging through her. His breath was shallow as he whispered against her mouth, “This thing between us is completely out of control.”
“Well, not completely. We haven’t…you know.”
He groaned against her lips, then kissed her again. “You’re killin’ me, darlin’. I’m enjoying the dyin’, but you’re killin’ me nonetheless.”

I would have to pick the opening scene because there is so much happening in the first few pages, from the action of the fire to the intensity of the emotion surrounding what Elle chooses to save in her house to the memories of the tragic accident she was involved in. And it is all witnessed by this man she barely knows. I just love it.

Everything hurts, thought Elle Brooks as she sank lower in the bathtub. Her back and shoulders ached from carrying bales of hay and brushing the horses that morning at the Heaven Can Wait Horse Rescue, where she volunteered. Although she preferred the physical labor over the headache she got from spending the afternoon with her financial advisor, going over the trust and through her finances. Between his company and his considerable life insurance policy, her beloved Ryan had left her with a substantial amount of money. But she’d give it all away for one more day with him.
She pushed a bubbly pile of suds across the spacious garden bathtub as the final strains of one of her favorite Pink songs faded in her ears. Usually the pop star’s music could energize her, but tonight she felt more like a sinking stone than any kind of rock star. With a sigh, she pushed the drain release with her toe and pulled the earbuds from her ears.
That’s when she heard the sirens.
Hair raised on the nape of her neck, and a chill that had nothing to do with the cooling bathwater raced up her spine. She slammed her eyes shut against the onslaught of memories. It had been over a year since Ryan died, but the images of the ambulance’s throbbing lights and the mournful sounds of the sirens were as vivid as if it had happened the day before.
She caught the first whiff of smoke as she heard the fire trucks pull up in front of her house. Water sloshed over the side as she stumbled to get out of the tub. Grabbing a towel, she scarcely had time to run it over her body before she heard the slam of her front door and raised voices.
Reaching for her pajamas, she pulled on the cotton shorts and wrenched the tank top over her head.
Move, her brain screamed. Get out.
The fabric clung to her damp skin as she snatched up her short robe and raced out of the bathroom. From the landing, she could see a flurry of men in yellow coats dragging a gray hose across the Italian marble of her foyer toward her kitchen.
She choked on the acrid smoke filling the air. There were no blazing flames, but the smoke scorched her throat, and she blinked against the sting of it to her eyes.
An older fireman caught sight of her. “You need to get out of the house, ma’am.”
Panic gripped her as she wildly looked around at the chaos invading her home. Then her gaze caught and held on the familiar eyes of the tall cowboy who’d just stepped into view. He was dressed in jeans and boots and a black Stetson hat, and the sight of his broad shoulders filling the doorway somehow grounded her.
She didn’t really know him—she’d briefly met him a few weeks ago. But that one time had shown his ability to stay calm and steady in a crisis situation. His name was Brody—Doctor Brody Tate. He was her best friend Bryn’s veterinarian. But why was a veterinarian at a house fire?
A plume of dark smoke billowed out of the kitchen, and Elle caught the distinct sound of the crackle of flames. She coughed, then turned around and ran back down the hallway.
She heard the older fireman’s voice yelling, “Get her out of here, Tate,” followed by the sound of cowboy boots sprinting up the stairs as she raced to the closed door at the end of the hall.
She pushed through, ignoring the rush of emotions that normally flooded her when she opened the door to the room decorated in pink-and-white stripes. A hand-knit pink blanket lay in the seat of the rocking chair. Elle grabbed it and clutched it to her chest. If she could only save one thing, it had to be this.
She turned back to see Brody in the doorway. He didn’t say anything, just reached for her hand and led her quickly back down the hallway.
They reached the top of the stairs, and she froze again at the commotion below—the rush of the firefighters’ feet, the commanding tone of their voices as they shouted orders, the pulsing flash of red lights against the white walls of her entryway.
Brody pulled at her hand, but she couldn’t move. He turned back and must have seen the panic in her eyes. His tone was soft as he swept her up, cradling her to him as if she weighed nothing at all. “It’s all right, darlin’. I’ve got you.”

This is a book about two widows, so it’s a story of loss and heartbreak, but also of redemption and discovering a capacity to love and be happy again. It’s about courage and bravery and taking chances. After losing his wife, Brody is more determined than ever to put his daughter first and to be a great dad. And Mandy is such a spunky fun character who declares Elle her best friend. But in spending time together, Elle discovers Mandy is being bullied by some girls in her class. Through watching Mandy and spending time with a rescue horse who loves to be sang too, Elle discovers a courage inside herself she didn’t realize was there. And through stepping in and standing up, these three people find a way to forge one complete family from two broken ones.

Giveaway: A paperback copy of When a Cowboy Loves a Woman by Jennie Marts

To enter Giveaway: Please complete the Rafflecopter form and Post a comment to this Q: This book is set on a horse rescue ranch and so much of the story revolves around rescuing wounded animals and people. Can you think of a time when you rescued an animal or another person? It doesn’t have to be a daring feat, sometimes all it takes is a hug or a kind word to save someone’s day.

Excerpt from When a Cowboy Loves a Woman:

When a kitchen fire forces young widow Elle Brooks to move in with her friend Bryn and her motley collection of rescue animals, she doesn’t foresee ending up in the muscled arms of handsome cowboy and veterinarian Brody Tate. But she can’t deny the feelings that being close to Brody are stirring in her. Spending time with the hunky cowboy and his adorable young daughter as they rehabilitate rescued horses reminds Elle of all she lost in a car crash years ago.

As a widower himself, Brody is devoted to being a good dad for his spirited daughter. He hasn’t let romance even enter his head. But now he’s met Elle. Spending time with her is shaking up the calm he’s worked so hard to achieve, and he can’t seem to get this woman off his mind.

Elle and Brody have both lost people they loved, but their mutual attraction and growing feelings are too strong to ignore. The hope of a future together is a beautiful possibility, but can these two wounded souls take a chance on each other and find the courage to love again?

Jennie Marts is the USA Today bestselling author of award-winning books filled with love, laughter, and always a happily ever after. She is living her own happily ever after with her husband, two dogs, and a parakeet that loves to tweet to the oldies, in the mountains of Colorado.