Today it is my pleasure to Welcome author Sheila Roberts to HJ!

Hi Sheila and welcome to HJ! We’re so excited to chat with you about your new release, Sunset on Moonlight Beach!

Thank you so much for having me! It’s always a pleasure to visit with readers. 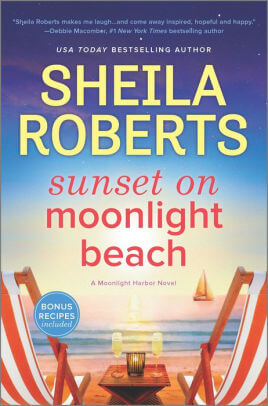 This book is part of my Moonlight Harbor series and I’m excited about it because my central character, Jenna Jones, is going to finally get her love life sorted out. If you’ve read any of the other books in the series I’m sure you have an opinion as to which man in her life she should choose. Hopefully, you’ll approve of the one she picks! (And not to worry about the love loser. He’ll get his perfect match in the next book. )I addition to Jenna’s story, you’ll get a chance to see some other favorite characters find their happy ending.

“When it strikes the hour for love you’ll know.” … “Don’t give up on love.” – Good advice for all of us from the women of Moonlight Harbor.

Being at the beach! I love the town of Ocean Shores, WA, which is the inspiration for Moonlight Harbor. The people who live there are happy and friendly. There’s something so romantic about walking along the beach. It’s easy for me to think up new adventures for my characters who live there.

After several books with these characters I feel we’ve gotten to know each other very well. And, no my characters don’t surprise me since everything they think, say and do comes from me. So maybe I surprise them once in awhile!

I think my favorite scene is the one where Jenna finally gets her man. I hope that conversation showed the depth of what the characters felt for each other. And Jenna endures some anguish and some very hard struggles before getting to her happy ending, so I was delighted to finally give it to her. She’s been a favorite character of mine for a long time now, and I hope that, if I were in her shoes, I could be as strong and determined. I think she’s proof that we writers often create characters that are who we hope to be.

I have a scene (in fact, a couple) where Jenna has to deal with something very emotionally difficult. (I don’t want to say more because that would be a spoiler.) It was hard for me as I’ve gone through this myself more than once. Because of that, though, I hope I was able to make everything she was feeling and thinking genuine.

I would hope that it showcases who I am as a writer. I love to include humor in my books but I also like to have some depth of emotion and some struggle – something for my characters to overcome.

I hope readers will enjoy the story and will come away encouraged and believing that we all can eventually find the love we long for and deserve.

I’m excited about this year’s Christmas book, “A Little Christmas Spirit.” It’s a Scrooge tale with a romance in it and I think it’s going to be my new favorite!

Giveaway: A signed copy of Sunset on Moonlight Beach

To enter Giveaway: Please complete the Rafflecopter form and Post a comment to this Q: Do you believe there’s such a thing as a second chance at love? Can you love more than one person in a lifetime?

Excerpt from Sunset on Moonlight Beach:

Jenna Jones has been standing on the shore of the Sea of Love for too long. Even with two good men interested in her, she’s been afraid to wade in. According to her best friend, Courtney, she should. The water’s fine. Life is great! Practically perfect, if you don’t count Courtney’s problems with her cranky ex-boss. Maybe Courtney’s right. It’s time to dive in.

When tragedy strikes, everything changes and Jenna’s more confused than ever. But this fresh heartache might help her figure out at last who she can turn to when times get tough.

Full of warmth and humor, Sunset on Moonlight Beach proves that every ending can be the beginning of a beautiful new story.

With nearly thirty books to her name, Sheila Roberts is a frequent USA Today and Publishers Weekly bestseller – and a fan favorite. Her Christmas perennial “On Strike for Christmas” was made into a movie for the Lifetime Channel and her novel “The Nine Lives of Christmas” was made into a movie for Hallmark. Her novel “Angel Lane” was listed as one of Amazon’s Best Books of the Year. Before settling into her writing career, Sheila owned a singing telegram company and played in band. When she’s not traveling, Sheila splits her time between the Pacific Northwest and Southern California.
Website | Facebook | Twitter | Instagram | GoodReads |