Today it is my pleasure to Welcome author Victoria James to HJ!

Hi Victoria and welcome to HJ! We’re so excited to chat with you about your new release, Wishing for a Cowboy!

Thanks so much for having me back! 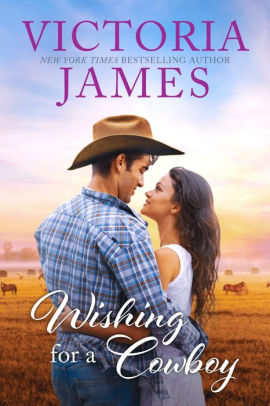 Secret Baby with a Twist…when Janie, a woman Aiden has never met before, shows up on his doorstep claiming the fifteen year old boy with her is his son, they all embark on a journey that will show them the power of love, forgiveness, and the true meaning of family.

“Hi. You don’t know me, but I need your help.”
Ugh. No, that was all wrong. That could mean
anything. Her car could be on fire, or she could be
on the run from the police. Janie Adams took a
deep breath and rubbed her hands together, trying to warm up the best she could in her ancient
Honda, and attempted her silent rehearsal again.

I think while they both found each other attractive from the start, for each of them it became something more at different points in the story.
I think Aiden really falls for Janie’s heart. When he realizes how much she really loves his son, how much she’s sacrificed to keep him, he falls in love with her.

For Janie, it’s when she finally trusts that Aiden is innocent and really didn’t know he had a son and that he wants what’s best for Will and is willing to do whatever it takes to make his son happy.

Love can conquer all.

He paused, his gaze hopping from her eyes to
her lips, and everything faded until all that was
here was this moment between them that would
change everything. She wished she could live in
this space where she didn’t have to worry if they
were doing something wrong, where Aiden had
always been hers and could always be hers.
His mouth descended on hers like the softest
spring rain, and for a second that sweetness was
all she wanted. For a second. She let herself get
lost in the reality of Aiden. He wasn’t a fantasy
anymore. His lips were firm but gentle against
hers, until they weren’t.
She gasped against his mouth, and then his
hand tightened around her nape, and her hands
travelled up his arms, over the hard muscles, holding on to him, wanting to be closer to him.

“Ha! You wouldn’t let me? Wow, Aiden. I
mean, I knew you had to be a little cocky with all
the attention you get from women at the bar, who
seem to find that dimple that appears out of nowhere on your ridiculously handsome face charming, and that they think your scar is somewhat
thrilling—the whole piercing-blue-eyes-andblack-hair thing with the incredible body is also a
bonus—but I never expected you to be this arrogant. You can actually control who freezes to
death and who doesn’t. Wow. It’s good to know
you have superpowers. Good. To. Know.”
That didn’t sound like teasing anymore, and
the unexpected heat in her tone only fanned the
flames of his attraction even higher. Playful Janie
was adorable. Confident Janie was alluring. But
fiery Janie was damn near impossible to resist.
He ran a hand down his face, wishing for some
kind of divine intervention. Where was the phone
call now? “Then what do you suggest we do,
Janie?”
She lifted her chin. “We sleep together.”

Just as she was drifting off to sleep, the covers
flew off—and she screamed.
“It’s just me,” Aiden said, his deep voice thick
as he completely surprised her and scooped her
up into his arms.
“What are you doing,” she said, limbs flailing
and then holding on to him for dear life.
“Trying to be nice. Don’t make it so difficult,” he
said, walking into his bedroom and then placing
184 WISHING FOR A COWBOY
her on the bed. His bed. Her cheeks were flaming
as she quickly assessed his room. She’d never
been in here. Like the rest of the house, it was
clean and without clutter. A dresser, two nightstands, and a king-sized bed.
“Don’t do me any favors, Aiden,” she said,
scrambling under the covers. She may have been
slightly giddy over this. Touched. But she didn’t
want him to know it. Somehow letting him know
felt like giving up on an argument, even though
she couldn’t remember why she needed so badly
to win it.
“Well, this certainly isn’t for my benefit,” he
said drily, joining her under the covers and wrapping her up in his arms

If they are a looking for an uplifting book in which the characters will have to dig deep and be courageous in order to live the life they really want. This book will leave readers with a happy sigh and filled with hope.

I’m working on the fourth book in the Wishing River series. The hero and heroine of that book have appeared in all the other Wishing River books and they are finally going to get their own HEA!

Giveaway: An e-book copy of the first book in the Wishing River series, The Trouble with Cowboys

Excerpt from Wishing for a Cowboy:

His bed. Her cheeks were flaming
as she quickly assessed his room. She’d never
been in here. Like the rest of the house, it was
clean and without clutter. A dresser, two nightstands, and a king-sized bed.
“Don’t do me any favors, Aiden,” she said,
scrambling under the covers. She may have been
slightly giddy over this. Touched. But she didn’t
want him to know it. Somehow letting him know
felt like giving up on an argument, even though
she couldn’t remember why she needed so badly
to win it.
“Well, this certainly isn’t for my benefit,” he
said drily, joining her under the covers and wrapping her up in his arms.
She couldn’t breathe in the best way possible.
She was pressed against him, his large, warm hand
splayed on her waist, and before she could even
think of it, when he shifted his leg, she tucked her
feet in between his calves.
“Holy crap, your feet are like ice,” he growled
deliciously against her neck.
“And that’s with two layers of socks on, so you
were wrong about me not freezing to death. I
would have,” she said, her voice sounding breathy.
“Starting at my toes.”
She now realized what he’d been afraid of. It
wasn’t that he didn’t find her attractive enough. It
was…this. This was too close not to want to be
more than friends who slept in a bed to stay warm
on a cold night. This was torture. She scooted a
little closer to him because, as she’d predicted, he
was a human furnace. And his bed smelled like
VICTORIA JAMES 185
him. Delicious and masculine and…she inhaled
deeply.
Loudly, she realized.
“Do you have allergies? Are you going to
sneeze on me?”
“No,” she choked, trying to turn around to
frown at him.
He squeezed her waist. “Stop moving. Just.
Stop.” His tone was firm, but she detected a hint
of amusement in it as well.
Her heart pounded rapidly, and she wanted to
turn around to face him, pretend like this could
happen. And if she dared to wish for anything,
she’d wish that she and Aiden and Will could be a
real family.
Immediately, she was mortified for even thinking that. That was selfish. It was what she wanted.
It wasn’t what Will needed. It wouldn’t be fair to
anyone; it would just confuse Will.
The sound of Aiden’s deep breathing against
her neck, the warmth emanating from his strong
body, and that hand so securely placed on her hip
made her very happy that, if this was all she got,
she would know what it was like to be held by
him. What it was like to feel like a beautiful, desirable woman to such a beautiful, desirable man.
She would never forget this night. He’d gone
against his own better judgment and brought her
here. Because she’d asked him to. She had never
asked anyone for anything. At first, because no
one would have done it anyway. And later, because she’d learned to rely on herself.
How many nights when it was just her and Will
186 WISHING FOR A COWBOY
had she wished for someone to come in and ease
the burden? Someone to talk to? Someone to rely
on? But never would she have dreamt up Aiden,
because he was beyond anyone she could have
dreamed of. Maybe it was childish or silly, but it
felt so good to have someone hold her. To have
someone bigger, stronger, holding on to her as
though he’d never let anything happen to her.
She drifted off to sleep, wondering what it
meant that she’d asked Aiden…and he’d listened.
She wanted more. She wanted more Aiden, more
of this life, even though she knew that when they
woke up tomorrow, it would all be over.

Janie Adams has been a single parent to her nephew since he was a baby. Fifteen years later, she’s finally found out who his father might be, so the two of them travel across the country to find him. She’d do anything for this kid. But when they arrive in the small town of Wishing River, Montana, and Janie finally meets the ruggedly handsome cowboy she’d been told had abandoned his son, his shocked response changes everything.

Aiden Rivers can’t dispute this is his kid when he sees his own features staring back at him, but he had no idea Janie’s sister was pregnant when she left him. He didn’t even know she had a sister—clearly they’d all been lied to. Now he has fifteen years of fatherhood to make up for and no idea how to be a dad. This was never in his plans.

Janie sticks around to help him ease into parenting, everything from showing him how to lure a sulky kid out of his bedroom to keeping up with the latest teen-speak. Together, they surprisingly make a good team, this city girl and country boy. But when the past catches up with them, Aiden and Janie must decide what’s best for the boy who’s connecting them, not only for each other…which could mean splitting them apart.
Book Links: Amazon | B&N | iTunes | Goodreads |

She is a hopeless romantic who is living her dream, penning happily-ever-after’s for her characters in between managing kids and the family business. Writing on a laptop in the middle of the country in a rambling old Victorian house would be ideal, but she’s quite content living in suburbia with her husband, their two young children, and very bad cat.
Website | Facebook | Twitter | Instagram |