Today it is my pleasure to Welcome author Debbie Burns to HJ!

Hi Debbie and welcome to HJ! We’re so excited to chat with you about your new release, Summer by the River! 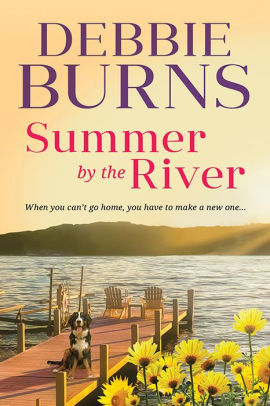 Single mother Josie Waterhill is perfectly happy with the “do over” she’s been given after her tragic upbringing. She’s created a new life and isn’t looking back. She and her six-year-old daughter Zoe are nestled safely in the Midwest, and Josie manages a tea garden owned by elderly Myra Moore. In fact, Josie can’t think of a thing she’d change.
Invariably, the world starts pressing in when Myra welcomes more guests—journalist Carter O’Brien and his giant rescue dog, Buttercup. Carter is charming, compassionate…and way too interested in Josie’s past. Carter’s interest in Josie deepens, and he inadvertently stirs up trouble when he uncovers things that Josie would rather not have known. Ready or not, Josie must make peace with her painful past so she can create a glorious future.

I love inspiring quotes the way some people love chocolate. While this one isn’t a quote of mine (which you may have been wanting here), there’s one by Norman Maclean at the beginning of the book that I want to share. It’s not only one of my all-time favorite quotes, but it also aptly foreshadows the multiple plot lines that are woven together as the story progresses:

“Eventually all things merge into one and a river runs through it.” – Norman Maclean

If you could have given your characters one piece of advice before the opening pages of the book, what – would it be and why?

I think I’d give Josie a hug and tell her that, while she’s done a great job of holding it together and raising her daughter, sometimes the world shakes you up to make room for something greater than you can even conceive.

To audition for the roles of Carter and Josie, I’d have it be the scene in which they’re out together for the first time and awkwardly meandering through the space of being attracted to one another while not being sure if they’re ready to do something about it, especially so for Josie. So much so, that to deal with her feelings, for the first time in forever, she’s had a bit too much to drink. There’s a lot of held-back emotion in this scene, and I think it would be about getting across what isn’t said as much as what is said. Here’s a snippet:

“She’s wrong,” she added, pointing a finger his direction and blinking heavily.
“How so?”
“You smell like Santa.”
He chuckled softly. “You mean like Scotch tape and freshly baked cookies?”
She set the half-finished second martini down and looked at him, her head cocked sideways, and her lips parted slightly. Her red-gold hair spilled over her shoulder, beckoning him again. “Is that what your Santa smelled like?” Her words were just a whisper.
“I can’t say I ever thought of it before, but that’s what came to mind. Why, what did your Santa smell like?”
She traced one finger over his hand and stayed quiet a long time before answering. “Like hope and disappointment.”
He shifted in his seat, her words stabbing him in the heart. “Are you going to tell me why?”
“Because I used to be little enough to believe he could fix everything. To think that, if I was good enough, for long enough, he would.”
“And Christmas came, and he couldn’t?”
“Most of the time, it just came without him.”
What would he take on to fix that for her? To make sure nothing like that ever happened to Zoe? No wonder Josie didn’t want to let anyone in. “Not everyone leaves, Josie. Not everyone disappoints.”
She turned his hand over and traced the lifeline of his palm. Her gentle touch heated his blood again. “Everyone leaves sooner or later. Especially the ones you want to stay.”

There are many shades of love, and often, before you can be ready to find love with another person, you have to love and embrace yourself for all that you are–even if it includes making peace with a past you’d rather not remember. Also, that love and forgiveness go hand in hand.

Giveaway: A paperback copy of Summer by the River by Debbie Burns

To enter Giveaway: Please complete the Rafflecopter form and Post a comment to this Q: I love old towns, and fell in love with Galena, Illinois (the story’s setting) while visiting. Walking through towns like Galena that blossomed in the mid-to-late 1800s, I can almost envision that I’m stepping in the same the footprints left by those who walked the streets a hundred and fifty years prior. Do you have a favorite historic town or place to visit, or do you prefer a more modern venue when you travel?

Excerpt from Summer by the River:

Making a fresh start in a new part of the country is challenging, but fate and good fortune lead young single mother Josie Waterhill and her six-year-old daughter to a cozy Midwestern town right on the river. There, Josie can raise Zoe away from the violence of the life she once knew, and make a new home in the historic tea house where they’ve been invited to stay.

The tea house seems too good to be true, until Josie’s elderly landlord Myra welcomes more guests—journalist Carter O’Brien and his giant rescue dog, Buttercup. Carter is charming, compassionate…and way too curious. Carter’s interest in Josie deepens and he inadvertently stirs up trouble when he uncovers things that Josie would rather not have known. Ready or not, Josie has to let go of her painful past so she can create a glorious future.

Debbie Burns is an award-winning and bestselling author and 2019 HOLT Medallion Award of Merit recipient. Her highly praised Rescue Me romance series features happily ever afters of the two and four-legged kind. She lives in a gingerbread house that’s almost cute enough to eat in Saint Louis.
Website | Facebook | Twitter | Instagram | GoodReads |