Today it is my pleasure to Welcome author Amalie Howard to HJ!

Hi Amalie and welcome to HJ! We’re so excited to chat with you about your new release, The Rakehell of Roth! 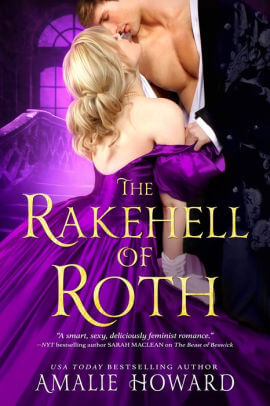 Sleeping Beauty meets As You Like It in a delicious, second-chance, frenemies-to-lovers tale between a plucky heiress and her runaway marquess. Abandoned by her knight in tarnished armor, Lady Isobel Vance is stuck in misery-ever-after, and after three years of loneliness in the country, she has had enough. It’s time to wake up, throw down the gauntlet, and go get her husband.

Was it peculiar that she didn’t feel married?
A forgotten glass of warm champagne in hand,Lady Isobel Vance, the new Marchioness of Roth, peeked up at the towering, silent gentleman beside her as they stood on the balcony. The Marquess of Roth could be a statue carved from marble instead of flesh and bone. Starkly beautiful. Impenetrable.

This is a marriage of convenience, so at first, the hero is attracted to my heroine’s looks – she’s a diamond of the first water, as they say. My heroine is attracted at first to the hero’s strength, appearance, and status. This is a superficial attraction, however, and other things become more important – like my heroine’s courage and determination or the hero’s generous heart buried beneath a mountain of baggage. These two really have to work for their HEA.

Isobel had no idea who closed the distance first, only that his lips were on hers, his tongue sliding across the seam and demanding entry. She gave it. She wanted it. Wanted him. Opening her mouth, Isobel welcomed him, meeting him stroke for stroke. Their teeth ground together as their bodies erased any space between them, his arms banded around her…her fingers knotted into the hair at his nape. She yanked. He groaned, his lips detaching for breath.
“Isobel—”
“Shut up and kiss me, Winter.”

Oh my goodness, my favorite scene is a very, very naughty one. It’s right after she participates in a scandalous auction and places an obscenely high bid to win the company of her husband. I love the fact that Isobel does what she has to do to get what she wants. She’s nervous and scared, but she’s so determined. I really love her agency in this book.

Her smile was pure seduction. “You knew a girl, Roth, from three years ago who was unsophisticated in every possible way. Practically asleep. She’s not anymore.” She crossed her arms over her chest and licked her lips. “Now close that sinful mouth of yours, strip like a good lad, and show your mistress what she’s won.”

I would love for this book to be optioned! Without a doubt, I would have to say the scene by the well in the garden. It’s the first scene where Isobel tells Winter what she wants and why she has come to London. Again, her agency makes me want to shout with glee!

Bloody hell. Was she flirting with him?
“Who are you and what have you done with the timid Lady Isobel?”
“She grew up, and she was never timid, my lord.” Her laugh rang out between them. “You simply did not know her.”
His appreciative gaze slid from her glowing face to the embroidered bodice of her walking gown to the tips of her muddied boots. “Indeed.”
The push and pull between them had begun when she’d barged into his home, and had only increased during that teasing dance of theirs—like weapons being drawn and paces being counted in a duel unlike any other. And now, it seemed as if she were preparing to take it up another notch.
Perhaps he had underestimated his little country wife.

I know everyone’s saying if you love Bridgerton, read this…BUT SERIOUSLY, if you enjoyed Bridgerton, give this one a try. Secrets and misunderstandings abound in this tale, but so do lots of laughter, friendship, and enough smexy shenanigans to leave you breathless. Also, as you can probably guess from some of my answers, I’m all about resilient women, feminist thinkers, and female agency, and I hope that Isobel brings that to the page.

My next historical romance is THE PRINCESS STAKES, which will be out June 29, 2021. This is a diverse historical romance story about a biracial Anglo-Indian princess who is on the run from an assassin and falls into the arms of the boy–now duke–whose heart she broke. Talk about tension and past baggage…

The next in that series is RULES FOR HEIRESSES, and it comes out October 26, 2021. That one is about the hero’s sister from THE PRINCESS STAKES, who wants to avoid her future as some rich man’s possession and takes off for shores unknown. The hero in this story is mixed with Caribbean roots, so that’s my wheelhouse.

I’m super excited about both of these books!!

Giveaway: Print copy of THE RAKEHELL OF ROTH.

To enter Giveaway: Please complete the Rafflecopter form and Post a comment to this Q: What’s your favorite trope in historical romance (or romance in general). Mine is hands-down enemies-to-lovers. =)

Excerpt from The Rakehell of Roth:

EXCERPT: THE RAKEHELL OF ROTH BY AMALIE HOWARD

As owner of the most scandalous club in London, the last thing the notorious Marquess of Roth wants is a wife. Keeping up his false reputation as a rake brings in the clients with the deepest pockets—money he needs to fund a noble cause. Even though everything inside tells him not to leave his beautiful, innocent wife behind at his country estate…he must.

But three years later, tired of her scoundrel of a husband headlining the gossip rags, Lady Isobel Vance decides enough is enough. She is no longer a fragile kitten, but as the anonymous author of a women’s sexual advice column, she’s now a roaring tigress…and she can use her claws.

Isobel decides to go to him in London, channeling her powers of seduction to make him beg to take her back. But she didn’t expect her marauding marquess to be equally hard to resist. Now the game is on to see who will give in to the other first, with both sides determined like hell to win.
Book Links: Amazon | B&N | iTunes | Goodreads |

AMALIE HOWARD is the author of the Publishers Weekly bestseller, The Beast of Beswick, touted as “a smart, sexy, deliciously feminist romance.” She is the co-author of the #1 bestsellers in regency romance and Scottish historical romance, My Rogue, My Ruin and What A Scot Wants, and has also penned several young adult novels, critically acclaimed by Kirkus, Publishers Weekly, VOYA, School Library Journal, and Booklist, including Waterfell, The Almost Girl, and Alpha Goddess, a Kid’s INDIE NEXT selection. Of Indo-Caribbean descent, she has written articles on multicultural fiction for The Portland Book Review and Ravishly magazine. She currently resides in Colorado with her husband and three children. Visit her at amaliehoward.com.
Website | Facebook | Twitter | | Instagram |