Today it is my pleasure to Welcome author C.R. Grissom to HJ!

Hi C.R. Grissom and welcome to HJ! We’re so excited to chat with you about your new release, Eyeful! 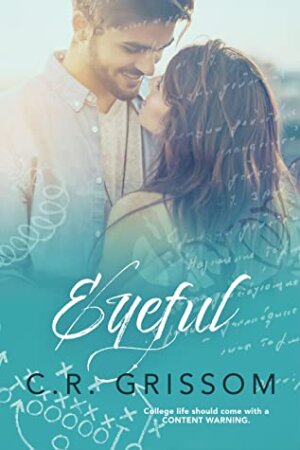 At its heart, Eyeful is about tradition, family, and the lengths you’ll go to protect the people you love.
Forced to hold his family together, Tiago Trindade is losing his slippery grip on control. Following a life-changing accident, his father chose to shut himself off from the world, preferring absolute silence than interacting with his son. Tiago’s grandmother’s heartbreaking slide into Alzheimer’s eviscerates him as she teeters between recognition and blankness. If that weren’t enough reason to lose all restraint, Tiago’s GPA slide might earn him a spot in the colosseum stands rather than on the field with his Gladiator brothers. When Phoebe Makenna walks into Pump It Fit—his attraction for her helps take his mind off his problems. Once he suspects her mother of scamming his family out of their home—Tiago decides to get closer to Phoebe to obtain proof of her mother’s culpability. Fighting an attraction to someone who may have had a part in hurting his family divides his loyalties. Tiago expected to expose the truth, he didn’t count on losing his heart.
Phoebe Makenna left Las Vegas to escape the fallout from her Mother’s arrest for real estate fraud. Fortis University is her fresh start. In an ironic twist of fate, Phoebe finds herself couch surfing in her grandmother’s retirement village, one shaky step away from being homeless. Tiago—the drool-worthy placekicker for the Fortis Gladiators—needs a study-buddy. When the attraction between them spikes into something they can’t ignore, they become lovers. Phoebe falls hard for Tiago even though she believes he’s keeping secrets. Her ratcheting shame and hopelessness about her mother’s crimes prove too difficult to ignore. As the cocoon she built around her new life erodes, Phoebe realizes she stands to lose Tiago. She’ll soon face a choice between protecting Tiago’s family and betraying her own.

This snippet is from one of Phoebe’s chapters. She and Tiago are at a cafe:

“Grams and Agnes live in a retirement community with rampant unprotected sex.”

The coffee he just sipped sprays out of his mouth and dribbles down his chin. “What?”

I use the napkin from my lap to mop his horrified face. I didn’t realize how fun it would be to drop this tidbit in someone else’s lap. And I laugh. “You heard me.”

I wanted to write a story that featured a character of Portuguese ethnicity. Tiago became that character—someone with an ethnic background born in the U.S. just like me. Tiago’s struggles with his grandmother’s mental decline into Alzheimer’s were framed from my own experiences with my mom, an Amazon of a woman packed into a compact five feet of determination and a fierce love of family.

Where Tiago has an entire community and his teammates to back him, Phoebe has only one. Her grandmother remains the only positive influence in Phoebe’s life. Phoebe’s mother is the antithesis of Tiago’s. I liked the juxtaposition of creating two radically different women who took part in raising these two characters.

As for what inspired the plot, a title scam article crossed my feed and it struck me (read: scared the life out of me) that a scammer could steal your home with a signature.

Phoebe’s sense of humor surprised me. I didn’t set out to write a character willing to laugh at herself. There’s a scene where Phoebe has to dance in a ridiculous costume. It was one of those scenes I didn’t plan, but once the scene took shape, I had a blast writing it.

I knew Tiago’s core values, his sense of obligation, and his love of family. I was surprised how often he messed up in conversations with Phoebe. In trying not to fall, he tripped in epic ways.

The character who surprised me most was Agnes, Grams’ friend. She was supposed to show up in a small scene, but once she arrived in the story there was no stopping that woman from making her presence known. I didn’t expect their powerful connection or the profound influence Agnes would have on Phoebe. I love Agnes—her strength and sass made her a perfect mentor.

My favorite scenes happen when Tiago invites Phoebe to a Portuguese Festa (festival), in his community. This particular scene is from Tiago’s chapter while they watch the parade. Teens, tweens, and younger girls represent Queen Isabel—who fed the poor during a famine in Portugal during the 13th century—wearing white ball gowns, embellished velvet capes, and rhinestone tiaras. Later, the public will be fed in honor of this tradition. The scene snippet was culled from the point where the queens walk in front of the pair.

“Wow. I had no idea this even existed. I can only imagine all the clamoring for the crown. Why are the queen’s attendants called side maids?”

“That’s an excellent question and I haven’t got a clue.” I wave at Fernanda, last year’s queen, as she passes by. Her two side maids immediately lean into her from either side. She giggles, and waves back.

“Girls everywhere lose a little bit of their dignity each time they come in contact with you. She’s twenty yards away, and yet I can see the stars in her eyes.”

“You’re wrong about her. She’s the younger sister of a girl I made First Communion with when I was eight.”

“She’s three years younger than us.”

She elbows me in the ribs.

“Was that very nice?” I rub the spot she hit. “You should kiss it and make it all better.”

This scene is from one of Phoebe’s chapters. Tiago stopped by the taco stand where Phoebe works. His grandmother’s memory failed that morning. Tiago opens up to Phoebe about his grandmother’s declining health. His admission proves pivotal to deepening their relationship.

Living with seniors has taught me the terror that word inspires. “Oh, Tiago. I didn’t know. I’m so sorry.”

“To be honest, I’m stalling. I’m sitting here praying that by the time I get back she’ll be her normal self. Instead of being hurt, she’ll be happy to have an unexpected treat.”

I lean over and pull him into a hug. I don’t know what else to do. I want to comfort him, but I know nothing can be done. You’re forced to watch the person you love forget you.
He squeezes me, holding on tight, which tips my chair toward his. He picks me up and drags me to his lap. Burying his face in my neck.

Shudders run through his body. I rub his back.

“Her birthday is April 13th.” He doesn’t look up. His forehead still rests on my shoulder. “That day I bought her filhós for breakfast. Mom made milho frito, a kind of Madeiran fried polenta. Dad made espetada, which is beef skewers. It’s her favorite meal from the old country.”

He raises his head to make eye contact. “Today she comes down to breakfast dressed for a celebration. We thought she was ready for Mass, but the fact that it’s Sunday isn’t on her eight-track playlist.”

“I’m sorry for your gran, that she thinks you all forgot. But most of all I’m heartbroken for you and your parents. You all bear the weight of her confusion.”

“Yeah.” He glances down, his discomfort clear. “I shouldn’t have dumped this on you.” He loosens his hold on me.

I use my index finger to raise his chin so we can see each other. “My grandmother is the most important person in my life. I literally have no one else. If this happened to her, I’d be lost. I feel you. I’m here for you.”

I stand and give him my hand to pull him up, too. “Go to her. Maybe the fog cleared or maybe she’s just hungry for donuts. Whatever else she’s going through she loves you and she needs you.”

He pulls me in for another hug. “Thanks for the reminder, and for getting it.”

Yes, this novel reflects my writing style. I love alternating chapters between main characters for different perspectives. Shenanigans, snark, and loyalty are qualities I find compelling in characters. As a reader, relatable characters draw me back to books I’ve read before because I want to revisit stories featuring those fictional friends.

Great question. A peek into my culture—maybe instilling the desire to go to a Portuguese Festa someday. 🙂 Families are formed by blood or by friendship. Phoebe and Tiago’s families are vastly different, which affects how they each tackle falling in love and develop trust. At the end of the day, I hope Eyeful provides an escape for the reader. I hope they find humor and heart in the telling of Phoebe and Tiago’s story.

My next release, Dutiful, is a free short story featuring Everest and the rest of the Gladiators. Dutiful will be offered to my newsletter subscribers.

Handful, book three in the Gladiators of the Gridiron series, features Everest and Kirsty and will release later this year. Everest dominates on the field and off. He’s a natural-born leader who protects those he cares about, whether they’re his sisters, teammates, or friends. Everest thought he had everything lined up like hash marks on a football field…until he met Kirsty. Suddenly, he can’t get the pint-sized pixie out of his head. He has a game plan, but getting ghosted isn’t a move he’s ever had to tackle.

To enter Giveaway: Please complete the Rafflecopter form and Post a comment to this Q: Friends to lovers is a favorite trope of mine. What’s your favorite romance trope and why?

All Phoebe Sharpe wanted was to start over at a new college to escape the drama and humiliation of her mom’s sordid past. But her present is hardly less complicated. To avoid sleeping on the streets, Phoebe seeks sanctuary at a 24-hour gym. When she meets the smoking hot Tiago, her desire to remain anonymous disappears.

Fortis University kicker Tiago Trindade has more on his plate than the average college sophomore. He’s trying to keep his GPA high enough to maintain his football scholarship while balancing practice and a job at the local gym to help support his family. When he learns his grandmother’s been swindled out of the title on her house—which would leave them homeless—he’s determined to save them. And then he meets the girl of his dreams…who just might be involved in her mom’s con.

When Phoebe learns the truth about her mother’s role in scamming Tiago’s family, she’s torn. Should she protect her own family or save Tiago’s?

C.R. Grissom lives in San Jose, California—smack dab in the middle of Silicon Valley. She works for a high-tech company by day, and at night writes contemporary sports romance featuring young adults as they transition to college. Winner of the 2018 RWA Golden Heart Award in young adult romance for her first manuscript: Mouthful.
Website | Facebook | Twitter | Instagram | GoodReads |