Sweetheart by Sarah Mayberry is the first story in the multi-authored Busy Bean series, a collection of 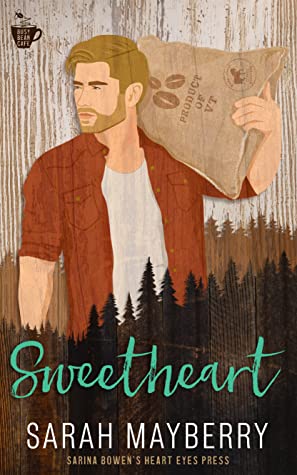 romances that are part of the True North world created by Sarina Bowen, with the focus on the Busy Bean coffee shop.

Haley Elliott is a barista and aspiring graphic artist working at the Busy Bean. When there’s a decline in customers, Haley’s sleuthing leads her to the reason why – a new coffee company is supplying beans to their rival and their products are delicious! When Haley approaches the Dark Horse coffee company about acquiring their beans for the Busy Bean, she discovers that it’s run by her sister Jessica’s ex-boyfriend Daniel Beck and his brother. While she had a minor crush on Beck when he dated her sister, Jessica and Beck’s relationship had not ended well and he’s clearly not thrilled with the idea of having anything to do with Haley, at least at first.

Seeing Haley again brings Beck into a dark place of remembering the emotional abuse and gaslighting heaped on him by her sister Jessica, who suffers from an as yet undiagnosed personality disorder and extreme mood swings. He was glad to escape that relationship but the memories still haunt him. The last thing he’d want is to have any involvement with another of Jessica’s family.

But Beck soon realizes that Haley is nothing like her sister. She’s sweet, kind, and generous and his attraction to her grows as he gets to know her. The feeling is mutual. One thing leads to another and they end up having a secret affair. But will the specter of Jessica ruin their growing romance?

I’m a big fan of Sarah Mayberry so I’m delighted that she is writing as part of the Busy Bean series! I’m impressed at how seamlessly she integrated familiar characters to those who’ve read the True North series, like Audrey Shipley and Zara Rossi who co-own the Busy Bean with her new characters. You wouldn’t know they were written by different authors. However you don’t have to have read any of the earlier series to read this one or any others to come as they are designed to be read as standalone romances.

Haley and Beck’s relationship is complicated from the start. Under any circumstances, it would be awkward to date a siblings ex, but because of how mentally fragile Jessica is and what went down in her and Beck’s relationship (some truly awful things), this takes awkward to a new level. It’s no surprise that they keep their feelings for each other under wraps, concerned about how Jessica would react to find out second hand. (She now lives in New York, but still has local friends). But the more time Haley and Beck spend together, the more their friendship and feelings for each other develop. This leads to some very sexy scenes and the realization that if they want more, they’re going to have to deal with the Jessica situation.

Haley’s family relationship is complicated too. She loves her sister, but she’s fully aware of her failings. She also has always come second in her parents’ eyes as they deal with their troubled older daughter. This comes to a head when her romance with Beck is revealed. But with Beck’s support, there can finally be some changes. While Haley and Beck do get their happy ending, there is a resolution to the issue of what to do about Jessica that is quite satisfying. The author makes you care about the characters and easily blends her storytelling with the established worldbuilding to make for an enjoyable and entertaining read. I would however add a content warning for readers in regards to the realistic depiction of mental illness.

I just wanted to get my hands on his beans

Four years ago, I had a ridiculous crush on my sister’s boyfriend. But when they moved away together, I put Beck out of my mind and my heart. But now he’s back, and roasting the best coffee in Vermont. I need to convince him to supply the Busy Bean. And I need more of those kisses we accidentally shared outside the coffee shop. He still makes my heart race faster than a triple shot of espresso.

She should be off limits, but instead she’s pushing mine

Her sister burned my life to the ground, so Haley Elliot is the last woman I should bring into my bed. Although our business relationship is giving way to something more than a fine grind. Neither of us can help ourselves. And what’s worse, I think I’m falling for her.

But it’s a small town, and ours is a big secret. And when her sister blows back into town, suddenly the coffee isn’t the only thing brewing…