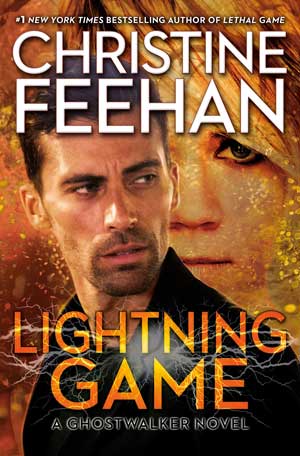 LIGHTNING GAME (a Ghostwalker novel) is the story of Rubin Campo and Jonquille, who are both Ghost Walkers wtih very special talents. Jonquille is like a lightning rod. Lightning finds her no matter where she hides, forcing her to stay away from others to keep them from dangerous lightning strikes. She doesn’t not want to be responsible for any deaths.

She attends a seminar where Rubin is a guest speaker. He has a special interest in lightning, and she’s hoping he can help her either control or get rid of this ability she has.

Rubin immediately realizes she is a Ghost Walker and that she is meant for him. While he cannot take away her talent, he believes he can direct it in a way that doesn’t bring danger to her or others. He also believes she is a surgical empath, like him, which makes her a very valuable person. With the help of his brother, Rubin will protect Jonquille and deal with those who are trying to capture her for their own purposes.

LIGHTNING GAME is a great Ghost Walker story and can be read as a stand-alone.  However, as a fan of the series, it was nice to catch up with some of the characters from previous books.

Christine Feehan never ceases to amaze me with the abilities she thinks up for the Ghost Walkers. This book has a lot of action, danger, and humor. Rubin and his brother are a riot. This was a great read!