Today it is my pleasure to Welcome author Annie West to HJ!

Hi Annie and welcome to HJ! We’re so excited to chat with you about your new release, The Sheikh’s Marriage Proclamation!

Helloo! Thanks so much for inviting me to stop by and talk about my new book. I’m waving a big hello from summery Australia. 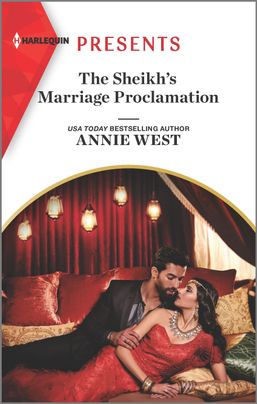 Fleeing a forced betrothal, Tara smuggles herself across the border, only to be accidentally delivered to autocratic Sheikh Raif of Nahrat. Discovering her desperate situation, Raif offers his royal protection. Forbidden attraction flares as an attempted kidnapping raises the stakes. Raif has one solution – to claim Tara as his bride!

The truck stopped and Tara’s pulse quickened. This was the part she feared. The dangerous part.
She could barely believe she was doing this, breaking the law, trying to enter a country illegally.
Escaping a country. That was more to the point.

There’s a huge dose of sexual attraction. Plus an awareness of and appreciation for each other’s determined character and strong personality. Raif is both intrigued and annoyed as he isn’t used to anyone defying him. On the other hand Tara’s concern to protect those who helped her makes him admire her. Tara isn’t sure if she can trust him, which makes her growing attraction to him a real problem.

I loved the kiss scene so I’ll share more than a snippet of it – keep reading for a longer excerpt below.

The scene where Raif and Tara meet is my favourite and one that absolutely would have to feature in a film version. Tara has been smuggled across the border to safety but the consignment she’s in accidentally ends up in the sheikh’s throne room. Raif is expecting a gift for his aunt and orders it to be unwrapped. He gets more than he bargained for.

‘Open it,’ Raif ordered.
Yunis knelt and untied the strips of fabric binding the cylinder. He murmured something beneath his breath that Raif couldn’t catch, then slowly, as carefully as if it were made of spun gold threaded with precious jewels, he unwrapped the parcel.
A tasselled edge of pale gold caught the light. Now Yunis unrolled more, shuffling further away as the long carpet was revealed. Golds mixed with the pale colours of the desert sands, contrasting with indigo blues and deep purples.
His aunt would love it. The colours were her favourites and not usually chosen by traditional weavers. Raif could see the piece was beautifully made. Yet why the demand for privacy? Why take so long to unroll it?
The chamberlain obviously thought the same thing. Before Yunis could stop him he grabbed one side and yanked. The carpet unspooled with a thud and an unexpected flurry and Raif found himself staring down at bare limbs, a tangle of dark hair and huge, staring eyes.
The chamberlain jumped back, exclaiming. Yunis froze.
And still Raif stared.
She, for it was undoubtedly a she, wore a dress the colour of ripe raspberries. Or half wore it, for there seemed to be a lot of glowing golden flesh on display. Shapely calves and smooth thighs. Her breasts rose and fell beneath their scant crimson covering as she sucked in huge gasps of air. And still those eyes stared back at him.

For an emotionally satisfying read, for sizzling sexual tension and for an escape to an exotic world where anything can – and does – happen!

I’m just about to start a new book so I feel like the world is my oyster! Who knows what wonderful things are waiting around the corner in my next story?
For upcoming books, keep an eye open for ‘Pregnant with His Majesty’s Heir’ in April/May. Think Cinderella, fish-out-of-water, royal romance and one night with consequences, all rolled into one bundle of fun! Then in September, it’s ‘A Consequence Made in Greece’, about a passionate affair between a down-to-earth scientist and a jaded billionaire with deeply hidden scars, all set in the glorious Greek islands.

Giveaway: Two readers will each receive a signed sheikh romance by Annie West in paperback format.

To enter Giveaway: Please complete the Rafflecopter form and Post a comment to this Q: Since I’m at the stage of planning a next book, why not tell me a name you’d love to read in a romance novel? Who knows, you might provide inspiration!

Excerpt from The Sheikh’s Marriage Proclamation:

Tara has been sheltering in Raif’s palace, away from prying eyes. She ran from her cruel cousin, Fuad, the Sheikh of Dalkhur, who wants to force her into an unwanted marriage. Raif has warned her that she must stay out of public view but she makes a mistake and has sparked an international incident by appearing in public emerging from his private rooms. Now that her location is known and scandal is brewing, the Dalkhur authorities have demanded her return. Raif is torn between wanting to keep the peace with the neighbouring kingdom and wanting to protect Tara. They have just had a nasty scene with the Dalkhur ambassador and trouble is sure to follow as Raif refuses to hand her over against her will. Tension is high and tempers frayed.

Shielded by her enemy

Tempted by the forbidden…

Fleeing a forced betrothal, Tara Michaels escapes across the border, landing in Sheikh Raif’s opulent palace. Their countries are enemies, and he’s bossy and proud—but this charismatic desert king is offering her a luxurious safe haven…

Raif knows protecting Tara is risky, but he’s entranced by her beauty—and she stands up to him when others dare not. Yet once her identity as his guest becomes known, his final option is one he never thought he’d take: proclaiming Tara as his bride-to-be!
Book Links: Amazon | B&N | iTunes | Goodreads |

USA Today Bestselling author Annie West loves writing passionate, intense love stories. She has devoted her life to an in depth study of tall, dark, charismatic heroes who cause the best kind of trouble in the lives of their heroines. Creating heroines who are a perfect match for those strong, stubborn men is one of her all time favorite things. As a sideline she’s also researched dreamy locations for romance, from vibrant cities to desert encampments and fairytale castles. She lives on the east coast of Australia and her favorite things are books, good company, good food and travel.
Website | Facebook |