Today, HJ is pleased to share with you Sharon Sala’s new release: Somebody to Love

Welcome to Blessings, Georgia! Whether you’ve lived here your whole life, you’re returning after years of being away, or you’re new in town, you’re sure to find the happy ending you’ve always been looking for. 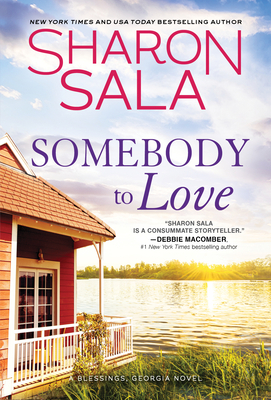 Fifteen years ago, a family member stole the money Hunt Knox had saved for college, while three of his siblings and his father hid the truth and told him to get over it. Betrayed by their lies and thievery, Hunt joined the army and wound up flying Apache helicopters in Iraq. Now, he’s a chopper pilot for an oil company in Houston, Texas, his father has been dead for six years, and he’s finally returning home to Blessings at his mother’s dying request.

Ava Ridley, the little girl his mother used to babysit, has grown up and is a nurse at his mother’s bedside when he arrives. Ava is overjoyed to see him. She had a huge crush on him when she was young. And as the two spend more time together, Ava’s crush grows to be even more.

Through secrets, lies, family betrayal, and difficult choices, Hunt’s not sure he and Ava can ever make a home together in Blessings. Or if life will once again lead them onto different paths…?

Enjoy an exclusive excerpt from Somebody to Love

Excerpt. ©Sharon Sala. Posted by arrangement with the publisher. All rights reserved.

Giveaway: A paperback copy of Somebody to Love by Sharon Sala

To enter Giveaway: Please complete the Rafflecopter form and post a comment to this Q: What did you think of the excerpt spotlighted here? Leave a comment with your thoughts on the book…