Love Spells and Other Disasters by Angie Barrett: What started out as an innocent enough business 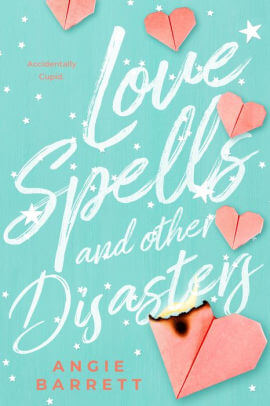 venture for their high school Marketing project sees unlikely duo Abby and Rowan team up to perhaps settle a historical score and earn Abby the reference she desperately needs to get into the university of her dreams.

Leveraging Rowans witchypooish and ‘weird girl’ social status, the girls conceive the plan to create a love spell booth in the lead up to Valentine’s Day selling crush spells for $10 a pop. Except the twist is, Rowan’s spells actually work courtesy of her unrealised magical bloodline. Having been raised by her mother who is a renowned supernatural author and ghost whisperer after her father tragically died in a car accident when Rowan was young, she has developed a healthy dollop of skepticism regarding all things mystical and esoteric. Hence, it takes Rowan quite a bit of convincing that she may just have some skills in the magical department after all. But of course, what starts out as a thrilling venture goes pear shaped quickly as more and more students, desperate to fall in love have no idea how powerful a love spell can be and despite Rowan trying to put a stop to it when the casualties begin to stack up, Abby will stop at nothing to get what she wants.

Be careful what you wish for and don’t meddle in other people’s business were the two dominant themes that sat as a clear moral backbone throughout. And whilst Barrett succeeded in creating a few quirky and fringish characters, particularly in terms of Rowan, her mother and her best friend Ethan, there were a few scenes that promoted seriously unhealthy high school relationships, including glorified promiscuity and inherent sexism.

This was courtesy of the typical popular girl and football team cliché that ran as a bit of a side current given Abby was one of the key players in the popular social group. In some ways this undermined the moral intent and so the lessons for a young adult reader were marred when there was very real potential to go in a different and far more intelligent direction given the initial set-up within the narrative.

Romantically, there were many moments that were super sweet, if not a little cheesy, and whilst I was disappointed in a few key aspects, there were some important lessons that came together nicely in the end. Undoubtedly, the biggest and certainly most relevant takeaway centred on volunteerism and that perhaps this should be something everyone endeavours to partake in, as generosity and kindness certainly create a much calmer and happier world.

I didn’t know when I wrote the first love spell that it would actually make things happen. Like, actually make people fall in love with each other…

How could I have known something like that? I mean, magic isn’t real, right?

But here’s the thing—the spell does work and so does the next one and the next one…and suddenly I’m getting a whole lot of attention from everyone at my high school. Me, Blend-into-the-Walls, Please-Let-Me-Introvert-in-Peace Rowan Marshall. And not only that, but I’ve also caught the attention of Luca Russo, a godlike, football-playing hottie who claims he likes me just the way I am. Ummm…

But as I’m about to learn, playing around with things you don’t understand means when things go wrong—like really, very awfully wrong—you don’t know how to fix them.