SCROLL DOWN FOR THE $50 RAFFLECOPTER GIVEAWAY!

IT’S RELEASE DAY FOR THE FINAL BOOK IN THE HAREM STATION SERIES! 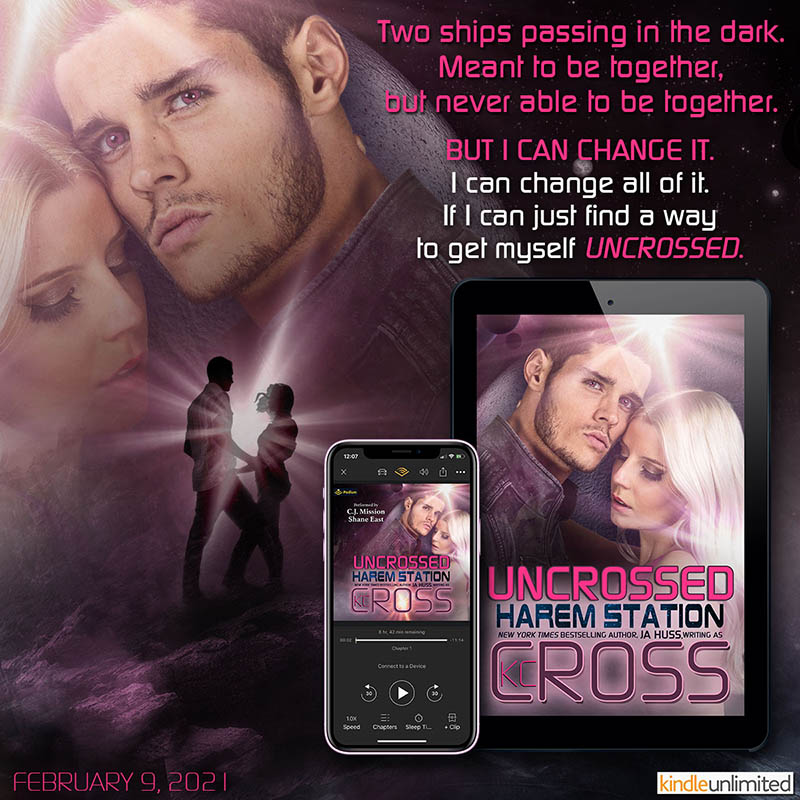 ALL OTHERS FREE IN KINDLE UNLIMITED!

BOOKS 1 & 2 Audiobooks are also FREE IN THE AUDIBLE PLUS CATALOG!

Princess Corla was supposed to be my soulmate.
But we were star crossed.
Two ships passing in the dark. Meant to be together, but never able to be together.
At least that’s what I thought.
But it turns out—my life is a lie, evil forces are out to get us, Harem Station is spinning chaos, and the soulmate bond won’t protect us.
Sounds pretty bad, right?
But here’s the best part.
I can change it.
I can change all of it.
If I can just find a way to get myself uncrossed.

We continue the kiss and she bites my lip. Hard enough to draw blood. I don’t care though. I am being a dick to her. I feel like twenty-one fucking years of frustration have finally caught up with me. I don’t know where I am or who she is, so I’m sorry she’s being forced to bear the brunt of my disappointment. If she wants to make a point with that bite, she can make her fucking point.
And when she realizes I’m not going to punish her for that little act of defiance, she relaxes underneath me. Becomes soft and compliant.
That’s the part I like best about sex. The way I can bully them into compliance.
And then her legs wrap around my hips and she begins to move with me.
That’s the signal I always wait for. That moment when they give in. Not give up. I don’t mistake her lust for defeat.
She’s just into it.
I lean down on top of her, acutely aware of how small she is compared to me. How little, and slight, and thin, and yeah… weak.
But I want her to come. She has to get something out of this, right?
I slip a hand underneath her and start playing with her ass. She’s so wet that her juices are practically spilling out of her pussy. And she must be into the ass play because the moment my finger enters her, she goes still and moans.
“You’re a sun-fucked asshole,” she pants. But it’s done. And she says nothing else after that. Because she’s too busy wailing in her climax.
Her body lights up. And it’s not just some random glow, either. It’s fucking spectacular. White light leaks through the pores of her skin and I know that if her eyes were open right now, she’d be aiming beams of light at me.
I come. I come hard. Grunting and pushing myself deeper and deeper inside her.
But in that moment I can see her clearly. Her glow illuminates her face and…
I let out a long breath. “Corla?”
Her eyes open. And I was right. She’s aiming her light at me. I have to close my eyes to avoid the sting of brightness.
She closes them again and the room darkens enough for me to look at her.
“Corla,” I pant, unable to believe my eyes.
“Fuck you,” she says, pushing me off her.
And I’m so stunned, I don’t resist. Just topple off to the side. She turns her back to me and I… I’m suddenly at a loss for words.
Where am I? On Harem?
“ALCOR?” I whisper out loud, hopeful. Please. Please, for the love of the sun, be here!
But there’s no answer.
I look at Corla’s back. She’s still glowing a little. The light she emits makes her whole body glisten in the returning hazy darkness.
“Fuck you. I’m going to sleep for a minute because I’m tired. Don’t wake me up.”
“Listen—”
“I said,” she growls, “I’m going to sleep for a minute. I’m fucking exhausted after that light show. I just told you I didn’t like it.”
“Oh.” I’m… a little bit speechless. And now I feel bad. Guilty, actually. Because if I had known it was Corla I’d have been… gentle.
Maybe. Or maybe not. Maybe I’d have been even more of a brute?
Maybe I’d have wanted to punish her for leaving me alone to fight this war by myself twenty-one years ago.
Maybe I’d have fucked her unconscious. Or unleashed a real light show.
I know I’m not supposed to be here. I get it. I’m inside the fucking spin node. And maybe this isn’t real, but this moment feels real enough for me. It feels like a fucking gift.
She is sleeping in a bed next to me. And if I get a choice of staying here or going back… well, I’m fucking staying.
Twenty-one years ago I met my soulmate. We took each other’s virginity. And then we went our separate ways.
Star-crossed. For all eternity.
I didn’t like the idea back then but let me tell you, I like it a whole lot less now.
I’m not giving her up.
I’m not leaving.
I’m not going back.

When I first started writing Booty Hunter back in the spring of 2019 I was bored and the idea that an alien would have two dicks was just fucking funny. And I figured that if the hero of my story was going to be doubly endowed, then his heroine needed to be extra special too—so I decided to fated-mate my boy to an alien princess who would glow when she came.

And this is pretty much all I set out to do. Amuse myself with double-dicked men and glowing runaway princesses on a station called Harem, where outlaws and outcasts were loved and accepted and could do all their favorite things like gamble, and pay for sex, and shoot shit up in arcades and shooting galleries.

Of course, I have trouble writing simple books and so before Booty Hunter was even over I knew that I was going to create a huge UNIVERSE outside Harem Station for these people to play in. 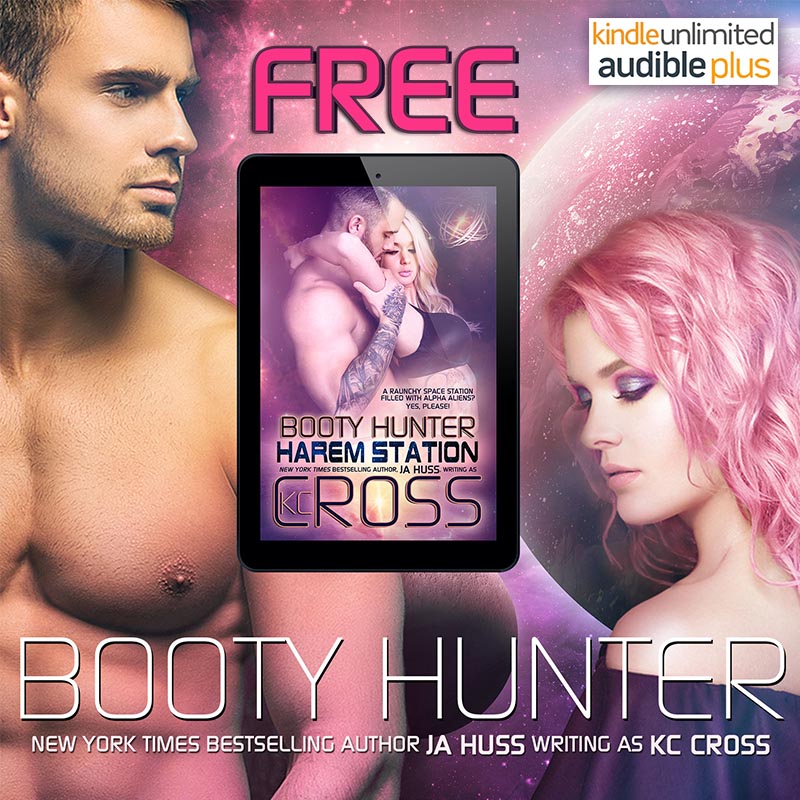 Booty Hunter is pretty small as far as scope goes. Most of the book happens on the station because I wanted that place to feel like home for the reader the way it felt like home for the “boys”. So a lot of time and effort went into making Harem Station feel like a character and not just a setting. It also sets up the rules of doubled-dicked men and glowing princesses and there are lots of “why the fuck is this happening to me” moments between Serpint and Lyra. 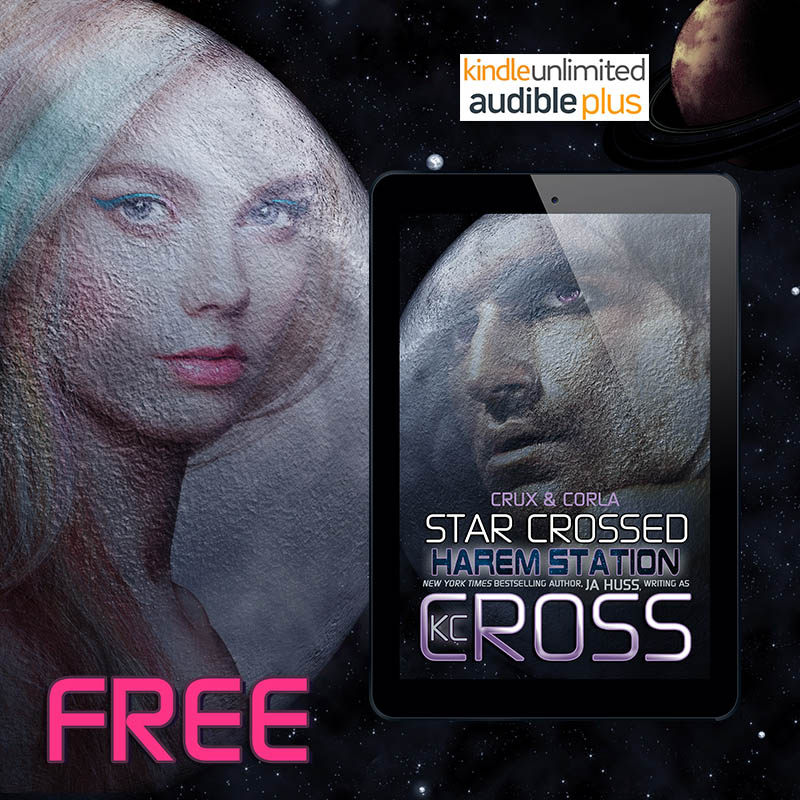 Star Crossed was originally written to be a free reader magnet but it actually turned into the most crucial part of the series. The entire series plot all came from that little novella about how the boys came to live on Harem Station from the point of view of their de facto “leader”, Crux. It starts twenty years before Booty Hunter when all the boys were kids and skips back and forth in two timelines so you get the full picture in a new and interesting way. It also set up the last book, Uncrossed. Because if our lovers in this book were star crossed – meant to be together, but never able to be together—then eventually we gotta take care of that shit. 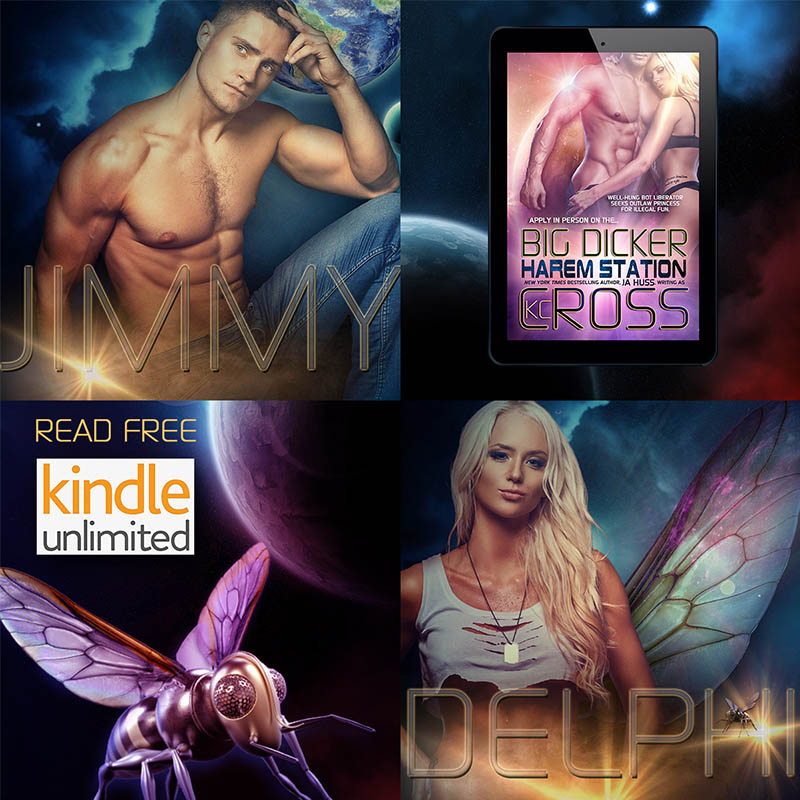 But I took thing off the station in Big Dicker because I needed to show readers that this world was huge. And while it might be “alien” it’s also familiar. Because I feel that if there aliens out there like us—with hands and feet and arms and legs who go places, and make things, and raise families—then their world cannot be that much different. It might look different, they might look different, but we would share the same overall problems. Food, shelter, companionship—that kind of shit. So Big Dicker found Jimmy stuck on a place that eerily resembled the “Happiest Place on Earth” and was meant to show you that people are people, no matter what species you are. It also introduced our “villainess”, Veila. 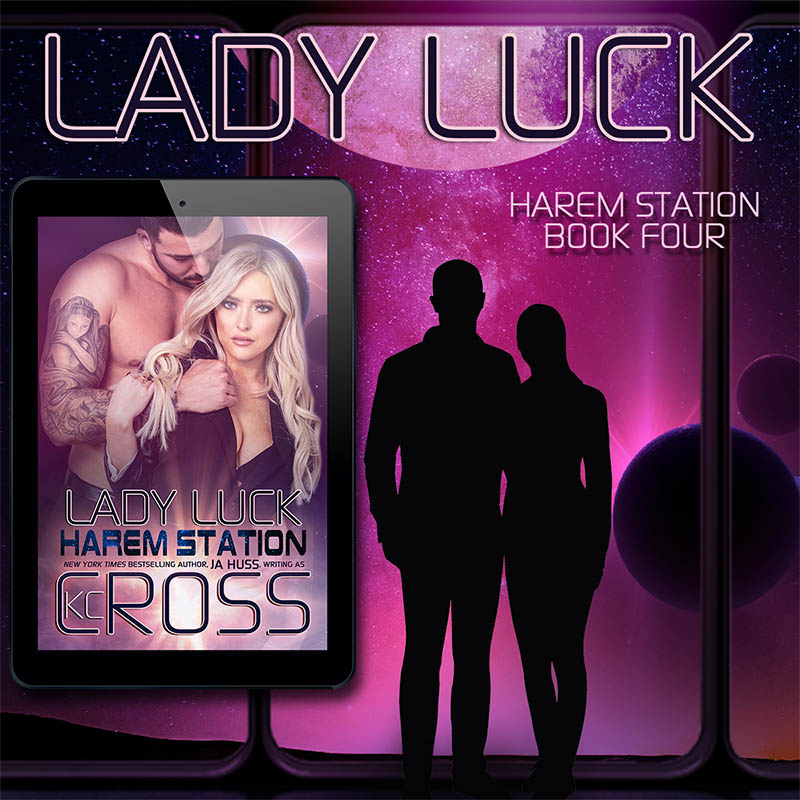 Lady Luck is where I got serious about the plot and started moving things forward. Nyleena was an over the top silver princess trying to find a way off Harem Station with a crazy Cygnian Princess scheme that looked a lot “like the house that Jack built” and Luck was coming to terms with BFF Valor’s distance and new loyalty to brother Tray. Luck is definitely my favorite brother because he and Nyleena are so casual about the big things. Nothing gets them down and while all the “soul-mate couple” are 100% on each other’s side, Luck and Nyleena were not fucking around in the whole “we will hunt you down and kill you slowly if you mess with us” and could back that up with amazing superpowers. 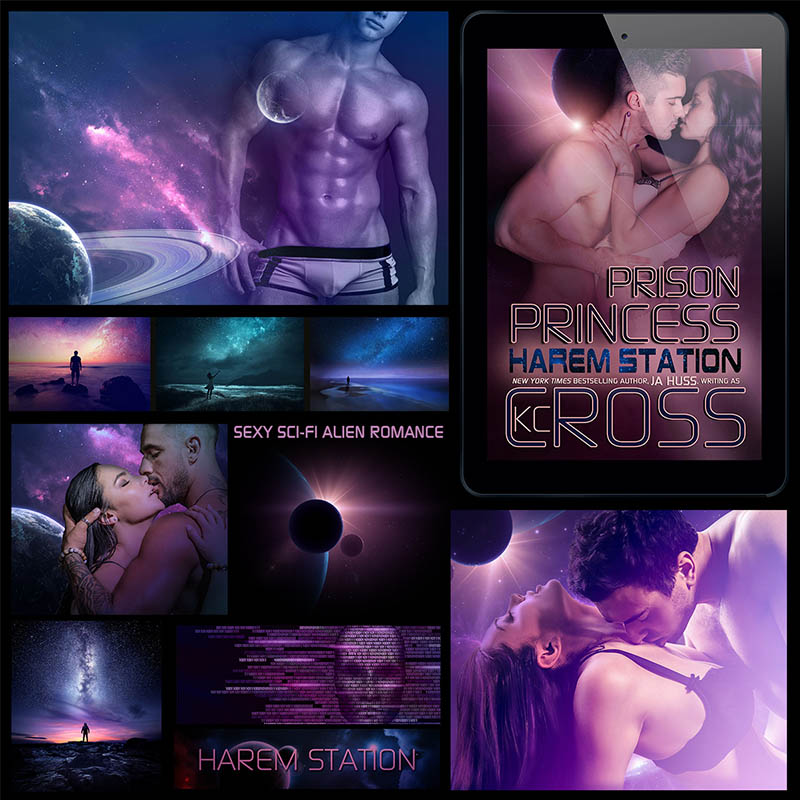 Prison Princess was where shit got virtual. This is an MMF between Valor, Tray and new girl Brigit. (The only one in the series who is not a princess, but an AI mind). And almost the entire book is spent inside a virtual reality because Tray and Brigit aren’t just people, they are computers. They took Valor along for the ride, but that turned into something more meaningful by the end. This is also the first book where the secondary artificial intelligent minds get a Point of View and we get a good, long look at the “bigger picture”. 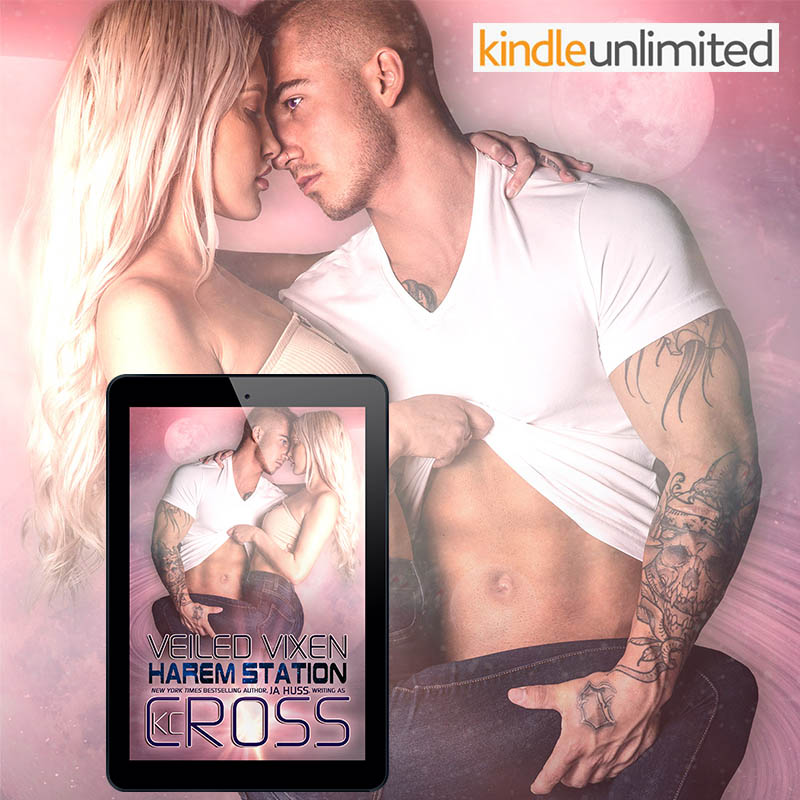 Veila, Valor’s true soul mate, was the evil villainess of the entire series up to this point. She showed up in Big Dicker and we all hated her immediately. But… there truly are two sides to every story and that’s what Veiled Vixen is about—Veila’s story and her road to redemption. I hated Veila just as much as anyone so I didn’t even give her a point of view – but, like Prison Princess, the AI Minds all get a point of view in this one because that’s where the overall plot lies. 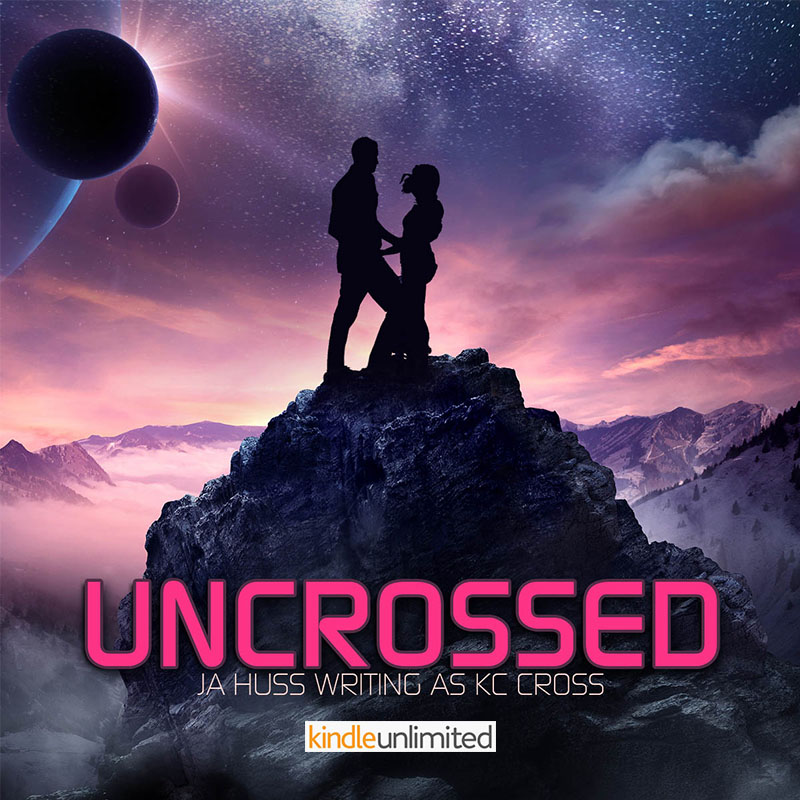 And finally, over a year after the release of Veiled Vixen, we have the last book UNCROSSED. Remember our star-crossed lovers from book two? They’re back. Well, Crux is back. Corla… she’s still frozen inside a cryopod. This books wraps up the big ending and gives Crux the ability to search for her own perfect HEA.

And… that’s it. I don’t think there will be any more books about this place. Though, some of this world will undoubtedly turn up in future space adventures. Just like this series is a little bit of a spin-off of my early Junco series. So I hope you enjoyed it. I really had a lot of fun writing it and living inside this new universe for a while. Harem Station does feel like home to me now. And I truly feel like that place is out there somewhere and maybe one day, in some other life, I’ll get a chance to see it.

P.S. Booty Hunter and Star Crossed are both FREE in eBook AND audio. If you haven’t started this series and want to give it a try, here are the links: