Today it is my pleasure to Welcome author Marlene Perez to HJ!

Hi Marlene and welcome to HJ! We’re so excited to chat with you about your new release, The Afterlife of the Party!

Thanks for letting me talk about The Afterlife of the Party. 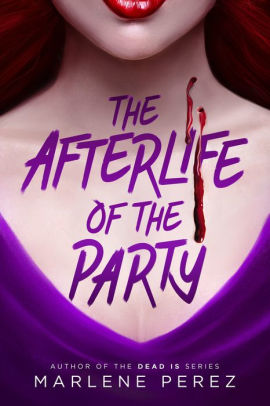 The Afterlife of the Party is the first book in a teen vampire trilogy. After a party that changed everything, Tansy and her friend/secret crush Vaughn go on the road to rescue their friend Skyler from The Drainers, a band of vampires, but the lead singer doesn’t want to give up his favorite fan.

When my best friend, Skyler, told me about this party in the Hollywood Hills, I was less than enthused. The last thing I wanted to do was fight traffic for the privilege of watching her flirt with some guy, but I didn’t want her to go alone either.
She was determined to go and friends don’t let friends go to parties without backup, so Vaughn and I were tagging along. I was riding shotgun and Vaughn was wedged into the tiny back seat of Skyler’s convertible. The top was down and a summer breeze ruffled his thick, dark hair.

Vaughn and Tansy are friends first and foremost and they share a sense of humor, attraction, trust, and loyalty. At first, neither one of them wants to chance ruining their friendship, but it gets harder to resist each other as the story progresses. Tansy’s had a crush on Vaughn for a long time, but never confessed her feelings. What she didn’t know was that Vaughn had been crushing on her for just as long.

Friends to fake to finally!

An excuse to touch. Yearning. Yummy!

“Do you read music?” she asked Vaughn. When he nodded, she thrust some sheet music at him.
“Take a look at this,” she said. “You’ll be next.”
He glanced down at the music, and I noticed his hands were shaking. Damn. His stage fright must be kicking in. I had no idea what to do to take his mind off his nerves. Well, no good idea.
Which is why I tugged on his hand, pulled him toward me, and said in my breathiest voice, “Knock e’m dead, baby.” And then I leaned up and kissed him.

There are so many scenes in The Afterlife of the Party I’d want to include, but I think it would be crucial to include the scene where Tansy first realizes what she’s dealing with.

Travis leaned toward me until our faces were only inches apart. “You are beautiful. I will make you very happy.”
My gaze narrowed on his high cheekbones. “Are you wearing glitter?”
“It’s stage makeup,” he replied defensively.
“Skyler, I think it’s time to go,” I said.
He gave me the creeps. There was a dark splotch of something on the corner of his mouth, and a word tickled my brain. Vampire.

If they like funny paranormal novels with solid friendships and a swoony romance. Readers might also be interested in the themes of vampirism and consent and the nature of fandoms.

The Afterlife is a trilogy and I’m currently working on book 3, A Sucker for You, as well as edits for book 2, I’m with the Banned. After that, I have a manuscript full of monsters I want to revise.

Giveaway: One signed copy of The Afterlife of the Party.
Due to S&H costs, this giveaway is only open in the United States. You must be at least 13 years old to enter and if you are under the age of 18, you must have your parent’s/guardian’s permission to enter.

To enter Giveaway: Please complete the Rafflecopter form and Post a comment to this Q: Who is your favorite paranormal character and why?

Excerpt from The Afterlife of the Party:

When I looked up, Armando was staring at me.
“Vaughn, when are you going to let me take a bite out of your delicious girlfriend?” Armando asked, like I should be flattered.
“How about never?” Vaughn replied.
Ozzie and Travis chuckled like it was the funniest thing Vaughn had ever said. “Armando can be very convincing,” Ozzie said. “And he doesn’t mind sharing.”
“Well, I do,” Vaughn said firmly. He had been right about posing as a couple to protect each other from The Drainers and their hangers-on.
Vaughn took my hand and led me to one of the large sofas in the entertainment area. He sat and then pulled me onto his lap. I perched there awkwardly until Armando wandered over, and then I wrapped my arms around Vaughn and draped myself all over him.
I shivered when Armando’s eyes met mine. “I think your girlfriend’s cold,” he said to Vaughn. “Want me to warm her up for you?”
Instead of answering him, Vaughn nuzzled my neck and whispered,” Remember what we talked about?”
“You want to kiss me?” I asked in a whisper.
“Is that okay?”
“Yes.” The word was barely out of my mouth before his lips were on mine.

I didn’t even want to go to the party.
Seriously, I’d rather have stayed home with my librarian-witch grandmother and her mystical book club than go. But my best friend Skyler begged me. So I went.
And it was the worst party of my life. Actually, it was the last party of my life.
Not only was there something very strange about the band, but the lead singer bit me afterwards. And then took off with Skyler.
Now I’m chasing down a band of dangerous vamps with my best guy friend Vaughn–the boy I’ve been secretly crushing on forever.
But anything can happen on the road.
I thought all I wanted was for things to change with Vaughn. For him to finally see the real me. But this wasn’t what I had in mind…
Let the afterlife begin
Book Links: Amazon | B&N | iTunes | Goodreads |

Marlene Perez is the author of paranormal and urban fantasy books, including the best-selling DEAD IS series for teens. The first book in the series, DEAD IS THE NEW BLACK, was named an ALA Quick Pick for Reluctant Young Adult Readers as well as an ALA Popular Paperback. DEAD IS JUST A RUMOR was on VOYA’s 2011 Best Science Fiction, Horror, & Fantasy List.

Her novels have been featured in Girl’s Life, Seventeen, and Cosmopolitan. The AFTERLIFE OF THE PARTY, a teen vampire novel, will be released February 2, 2020.