Today it is my pleasure to Welcome authors Kelsey McKnight & Sarah Fischer to HJ!

Hi Kelsey & Sarah and welcome to HJ! We’re so excited to chat with you about your new release, Operation Valentine! 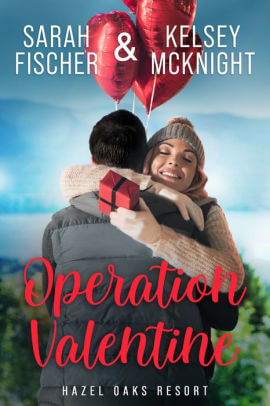 Nat is the Head Concierge for the historic Hazel Oaks Resort, a lodge in upstate New York on Lake George. She is forced to join forces with Hudson, the Adventure Coordinator, to help a pair of guests save their failing marriage. As they work to rebuild a romance between candle lit dinners and picturesque walks, sparks begin to fly between them. But Hudson has big plans that might take him away from Hazel Oaks, leaving Nat to wonder if pursuing a relationship will be worth the heartache.

This snippet is from when Nat and Hudson first began working together to help the unhappy couple find new joy in their marriage:

Hudson gasped loudly into the phone. “Do you think she killed him?”
“I don’t know why I even bother speaking to you.”
“Relax, I’m leaving my office and looking for him now. I’ll call you if I find him.”
“I’d prefer if you found him alive.”
“I’m sure she didn’t kill him; it wasn’t on the schedule.” And he hung up the phone.
And this part is from one of our favorite parts where Hudson takes Nat, along with the couple they’re trying to help, to see an old well that had been lost to time for generations:
“Come on, Nat. Worst thing that happens is nothing happens. Best case scenario, your wish comes true. So, go ahead, take a leap of faith.”

We both really enjoy writing books in both new and familiar locations, building new worlds that readers can feel at home in while also feeling as if they’re on vacation. Kelsey spent her childhood summers on the shores of Lake Michigan, staying in lodges just like the one we built for Operation Valentine while Sarah thrives on all things charming and grand. We built a place we’d like to visit full of things we’d like to do. We want our books to be reader escapes!

Our main characters are Nat and Hudson, two true opposites. Nat is a bit of a workaholic who wants to let loose a little and find romance while Hudson is a rolling stone who feels more at home on the side of the mountain than inside a stable home. We plan some aspects of our character’s lives, but we enjoy letting them take the reins while writing. For example, Nat ended up being a lot wittier than we thought she’d be while Hudson ended up being a classic literature fan.
We have a wonderful editor who always pushes us to really delve deep into our characters and their motivations behind things. We work hard to write character bios for all our characters to look back on, and we ended up trying something totally new. We wrote fake dating profiles for both of them with their favorite foods and perfect date ideas. Not all of these things made it into the book, but it helped us to feel connected to Nat and Hudson.

The first sparks of true romance is always the most thrilling. We love the first kiss, the lingering looks, and the realization of something more. In this scene, Nat and Hudson have a quiet dinner together and both begin to wonder if there might be something between them.

Nat looked up into Hudson’s eyes and inched a little closer to him. It’d been so long since she’d gone on a good date that left her filled with butterflies and the delicious sensation of hope. And while the night didn’t start as a date, it sure felt like one. It was one of the most enjoyable evenings she’d had in a very long time. He wasn’t some immature jokester…well, he was, but he was also a complicated man with deeper thoughts and emotions than she expected. That made her feel immature that she had judged him so harshly. In reality he used his infectious moods for the power of good, often making her smile even when she didn’t think she could.
After the fourth song in a row, with her head now resting on his shoulder, the music stopped altogether, and their footsteps stilled. Her heart was beating so loudly, she wondered if Hudson could hear it. Although they were no longer dancing, he was still holding her tight. She lifted her head from his shoulder and looked up at him. Hudson was draped in candle and firelight, his angular features had been softened, and his pale eyes glowed in the dark. He was just as handsome as she’d been fantasizing.
Nat instinctively tilted her chin upward as he leaned in, and her eyes closed just as his lips found hers in the softest of kisses. It was a fleeting moment, but her entire body flickered with the excitement of a first kiss. It had been gentle and unexpected, though not unwelcome, and Nat nearly pulled him back down for another as his mouth left hers.

Breaking up a budding relationship is always hard, or even hinting at it. We spend so much time building towards something epic and pointing out the cracks is always difficult. In this scene, Nat is speaking to the owner of Hazel Oaks about how to reward the hardworking employees of the resort.

“All your work has been generous, and Hudson, is there something I can do for him?”
Nat opened her mouth and closed it again. She knew what Hudson wanted as well. He wanted that job in California. But if she said it, he’d leave. If she didn’t, she’d be selfish. She couldn’t ruin his career like that. Besides, if he wanted to move, she didn’t want him here, right? She wanted a man who would move mountains to be with her, not just climb them when they were trying to bring a couple back together. She could argue with herself for days about what the right thing to do would be, but in the end, she couldn’t deny Hudson’s true wish of leaving Hazel Oaks behind for the land of sun and surf.
“Hudson is eager to move to the California property, the Jewel of Laguna. He’s mentioned being an adventure coordinator there a few times, and I think he’d really appreciate having a chance at a position.”
“Splendid. He’d probably do well there. Tell him to send me his resume and I’ll personally pass it along to HR.”
“Great,” she’d said, but she felt her smile crumble. This was one time she couldn’t fake it.

We both have very different writing styles as individuals. Sarah is fantastic at building cheeky leading men and sassy leading ladies with great back and forth. She’s wonderful at plotting grand stories and really making the most out of any story idea. Kelsey thrives in sweeping locations with romantic leading men who woo intelligent leading ladies in grand spaces. She also enjoys bringing real history and legends into her tales. Every piece we work on together is both a departure from what we know and a lovely blend of things we enjoy and excel in.

We want readers to take chances in love and not be afraid of opening up to new experiences.

Sarah and Kelsey are in the pitching stage of the second book in their Hazel Oaks series, which will take place in the summer. So far, they’re toying with the idea of bringing together a woman who thrives on numbers and order and a man who lives life on the open waters of Lake George and the Atlantic Ocean.

Kelsey is currently wrapping up a steamy contemporary series set in Montana entitled The Hollingsworth Sisters. It centers around three sisters who each find love while visiting a historic, family home in a small town. The first book, To Wrangle a Rancher, is going to be available on February 18th and is now available for preorder wherever books are sold.

To enter Giveaway: Please complete the Rafflecopter form and Post a comment to this Q: We’d like to know if you believe in something as simple, yet magical, as a wishing well.

She’s determined to play Cupid, but will her arrow go astray?

Nat Keller has worked at upstate New York’s Hazel Oaks Resort her entire adult life, dedicating herself to the lakeside lodge she considers home. After moving constantly as a child, planting roots and showcasing her organizational skills as the resort’s Head Concierge is her dream job. When she’s tasked with helping a married couple rekindle their romance, she’s excited to prove herself until she learns she’ll be working with a partner.

Lead Adventure Coordinator Hudson Dougal has never stayed in one place for long. He’s worked at Hazel Oaks for nearly a year and is contemplating his next big move when he’s asked to work with the only woman who seems to be immune to his charm. Always up for a challenge, Hudson accepts.

Soon, Nat and Hudson are igniting more than just a stale marriage. But just as Hudson wonders if roots have a purpose, he receives another opportunity. Will love be enough of an adventure to convince him to stay?

Kelsey McKnight
From Scottish lairds to billionaire businessmen, Kelsey McKnight will ignite your soul, no matter what century it lives in.

Kelsey is a university-educated historian from southern New Jersey. She has married her great loves of romance, history, and literature to create her own tales of dashing heroes, sultry bad boys, and lovable heroines who have their own stories to tell. They will take you through the ballrooms of Victorian London, the hills of the Scottish Highlands, New York City penthouses, and into small towns with big hearts, all at the flip of a page.

When she’s not writing, Kelsey can be found reading, drinking too much coffee, spending time with her family, and working for a nonprofit organization.

Sarah Fischer
Sarah Fischer works hard fighting the good fight in personnel security. She graduated with a degree in criminal justice and married the calm to her crazy. Then Sarah had a health scare and needed heart surgery. While recovering, she finally had the time to write the stories playing out in her mind. Her college romantic suspense series, Elton Hall Chronicles, is now available in its entirety on Amazon. First Semester, Second Snowfall, and Third Wheel remind you what you loved about college, show you what you missed, and make you yearn for what could have been. Sarah also has a contemporary short story in the Craving Bad anthology. In her spare time, you’ll find her with a book in her hand, at the movies, or watching just one more episode of reality tv.
Website | Facebook | Twitter | Instagram | GoodReads |