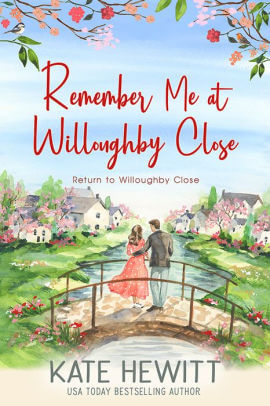 Laura Neale is determined to make a fresh start. A year after her husband’s death, she’s still left with too many questions and struggles with feelings of guilt, anger and grief. Hoping to rebuild her family’s life, she moves to Wychwood-on-Lea with her children, Sam and Maggie, all of them struggling in different ways to fit in and find happiness.

The warm community of women in Willoughby Close welcomes Laura with open arms, and, although wary, she finds their friendship helps her to take those crucial and challenging first steps. But then a sudden, intense attraction to her son’s teacher smacks her in the face. James Hill is funny, charming, and incredibly gorgeous—but he’s ten years younger than her and completely unsuitable. Laura’s not ready to start dating again, never mind actually falling in love. But what if her heart has other ideas?

As revelations about everything she once held dear surface, Laura wonders if she’s reckless or maybe just brave enough to try for love a second time. And if she is, can James be as well?

Excerpt. ©Kate Hewitt. Posted by arrangement with the publisher. All rights reserved.

Kate Hewitt wrote her first story at the age of five, simply because her older brother had written one and she thought she could do it too. That story was one sentence long—fortunately, they have become a bit more detailed as she’s grown older.

She studied drama in college and shortly after graduation moved to New York City to pursue a career in theatre. This was derailed by something far better—meeting the man of her dreams who happened also to be her older brother’s childhood friend.

When her oldest daughter was one year old, she sold her first short story to a British magazine, The People’s Friend. Since then she has written many stories and serials as well as novels. In 2007 she received ‘The Call’ from Mills & Boon for her first Harlequin Presents novel, The Italian’s Chosen Wife. Since then she has written over 25 books for Harlequin, and also writes women’s fiction for Carina UK and Lion Hudson Press. She loves writing stories that both tackle tough issues and celebrate the redeeming power of love.

Besides writing, she enjoys reading, traveling, and learning to knit—it’s an ongoing process and she’s made a lot of scarves.

Kate lives in a tiny village on the northwest coast of England with her husband, five young children, and an overly affectionate Golden Retriever.