Today it is my pleasure to Welcome author Katherine Garbera to HJ!

Hi Katherine and welcome to HJ! We’re so excited to chat with you about your new release, Texan for the Taking! 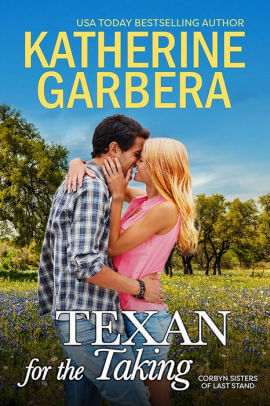 Two highly competitive chefs battle in and out of the kitchen, both of them enjoying the heat that flares between them until the battle goes too far and they have to choose between loving each other or winning.

Want to know why I think you cook?”
“Sure,” he said, leaning back against the porch railing.
She stood up and got close to him, looking right into his eyes. Her closeness made his senses go on high alert and he had to shift his legs to keep her from noticing. But she wasn’t paying attention to anything but his eyes. After a few moments she stepped back, tipping her head to the side.
“Hmm…I can’t say for sure but there is a part of you that is doing it for the glory. And…I think there’s another part of you that knows what I do. Food is love and by sharing it with the world, you are inviting them to love you. But will that be enough to satisfy you?”

The first time Jock cooks for Delilah he’s invited her to come to his home for dinner and bring a friend. She brings her Meemaw who is a hoot to write. She’s so much fun. Here’s a little snippet of that scene:

She was alone in the kitchen with Jock and all she wanted to do was turn to see if he was close enough that she’d accidentally brush against him.
Hell.
She had never been the kind of woman who was afraid to take what she wanted. But Jock didn’t feel like the kind of man she could sleep with and then move on from. Something was different.
It could be her. “You’re staring at me.” “I know,” she admitted. “I want to kiss you again, but
we’re not alone.” “I think we both wanted it that way,” he said, leaning
slightly closer. He smelled of that spicy cologne of his and the warm scents of the meal he’d cooked. She wanted to curl up in his arms and just breathe it in.
“I did,” she admitted. “Let me finish this up. Meemaw will be nosy if we take too long and believe me you haven’t lived until a seventy-three-year-old woman is questioning you about what you might have been doing alone with someone.”
“I don’t want to find out,” he admitted. “But I’m tempted. I better go make the espresso. You want some?”
“Yes. Meemaw will say yes but she has to have decaf for her heart,” Delilah said.
“No problem. Frangelico?” he asked. “In the espresso?” “Yeah, it’s a Rossi family tradition,” he said. “Then of course I’ll try it. Actually, you might think about making an espresso mousse with Frangelico for your restaurant.”
“I have a tiramisu with it right now, but I will give your idea a try.”
“Busted,” Nico said as he came back in with Priscilla behind him.
“Doing what?”
“Well we’d hoped for something more intimate, hadn’t we Nico?” Priscilla said. “But I should have known that Delilah would be talking food with a hottie like you instead of getting busy.”
“Meemaw! That’s it, you’re cut off,” Delilah said. “From what?” “Jock has some hazelnut liquor he was going to put in
the espresso, but you are already saying things that you shouldn’t.”
“Girl, you shouldn’t be embarrassed. He’s a good-looking man,” Priscilla said. “I’ll take a shot in my coffee.”
Jock laughed as he finished making the drinks and Delilah just went back to preparing to serve the dessert. She loved her grandmother and there had been many times over the years when Meemaw had been outspoken. She always made Delilah face the truth that she was sometimes ignoring.

I think the most difficult scene for me to write was when Delilah has come home and she knows she’s run away from her problems and doesn’t want to ask for advice but needs it.

Here’s a little bit of that scene:

“Thanks, Mom, I like that idea,” she said.
“I’m glad,” Mom said. “I really like Jock for you.”
She smiled at the way her mom said it. Like Jock was a gift to her and in a way he had been. Since he’d come to town with his big flavors and big personality, he’d shaken her up. Reminded her that she didn’t have to hide who she was from the world. And she didn’t have to hide from herself.
She’d seen the ugly side of her competitiveness that day when Drew had accused her of cheating and since then she’d tried to keep that side of herself hidden, shoved away. But with Jock she wouldn’t have to do that. He was a different kind of man.
“I do too. Now I just have to figure out how to get him to see that,” Delilah said. “But I have a few ideas.”
“I’m sure they will be brilliant,” Mom said.
Their dad looked over at them and smiled. “I’m so glad to have all my girls back home. Feels like it’s been years since we’ve all been like this.”
Delilah went over and hugged her dad. “Me too.”
Emma, Amelia and their mom came over as well and they sort of group-hugged in front of the barbecue. After all the years of not talking about the issues between them all and ignoring the fact that Amelia wouldn’t talk to Mom, it felt good to be this family again. The family that they had always tried to project around town.
“What’d I miss?” Meemaw said. “Did Jasper burn my steak? Are y’all trying to protect him?”
“Mom, I didn’t burn your steak. I know how you like it.
Sometimes a man’s just got to let the women in his life know how much they mean to him.”
Meemaw hmphed. “These girls know you love ’em. I raised you good.”
“You sure did,” Mom said.
“I like to think I should get some of the credit,” Dad said.
“Of course, you do, honey,” Meemaw said.

I think this book showcases my writing style. It’s got a sassy heroine, a hot hero and lots of emotional heart.

Mistakes happen but they don’t have to define you. Everyone faces setbacks and it’s not the setback but how they react to it that defines them.

I’m currently working on a Christmas book set in Whiskey River and featuring Nico Rossi the brother of the hero in Texan for the Taking.

Giveaway: An ebook copy of Texan for the Taking & 3 Tule ebooks

To enter Giveaway: Please complete the Rafflecopter form and Post a comment to this Q: What is the best thing you’ve ever eaten or your go-to comfort food? For me it is my mom’s meatballs. It’s the one thing I always ask her to make when I go home.

Excerpt from Texan for the Taking:

Who turned up the heat?

Classically-trained chef Delilah Corbyn walked away from the cutthroat celebrity kitchen world to return to her hometown of Last Stand, Texas. Delilah’s excited to open her own restaurant where she can finally make decisions without being scrutinized by the media. She thinks she’s living her dream until the new “it” chef saunters into town with a wink and a challenge. Delilah can handle heat in the kitchen, but he stirs up passions she’d long ago buried.

Jock Rossi has come a long way in the culinary world for someone who isn’t formally trained. Now he’s a rising chef with fame and money finally within his grasp. Determined to attract investors, he launches his latest restaurant in Last Stand. But when he meets his local competition, Jock’s plans skew off course. Delilah’s not only as talented as she is beautiful, she’s impossible to fool. Or forget.

Can Jock win her heart with his secret recipe or are they only destined to battle it out in the kitchen?

USA Today bestselling author Katherine Garbera is a two-time Maggie winner who has written more than 60 books. A Florida native who grew up to travel the globe, Katherine now makes her home in the Midlands of the UK with her husband, two children and a very spoiled miniature dachshund.
Website | Facebook | Twitter | Instagram | GoodReads |