This book includes mature content and is not suitable for readers under 17. 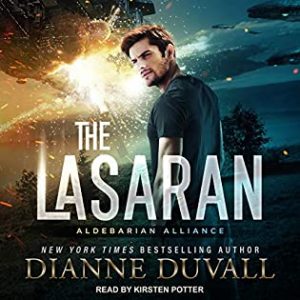 New York Times bestselling author Dianne Duvall brings readers the first novel in a thrilling new sci-fi series full of action, intrigue, humor, and romance.
Taelon searches the galaxy for his younger sister, who mysteriously disappeared while on a diplomatic mission. When an ally reveals that she was seized and is being held prisoner on Earth, Taelon descends upon the blue planet, intent on freeing her and exacting vengeance. However, all does not go as planned. Before he can find her, Taelon is captured and becomes the subject of torturous experiments. For what feels like an eternity, all he knows is pain and fury… until a mind tentatively touches his own and a woman’s voice forever changes his world.
After suffering tragic losses, Lisa is finally beginning to carve out a future for herself when chance sends her to the Anomalous Cognition Research Institute. What at first appears to be a benign organization seeking participants for a psychic study instead turns out to be a government facility harboring a much darker intent. Lisa discovers this too late and soon becomes the unwilling subject of a terrifying experiment. Just as fear and desperation threaten to consume her, a deep, compelling voice penetrates the looming insanity and lends her hope.
Having seen only the worst of humanity, Taelon is shocked when Lisa risks everything to free him. Together the two make their escape, and Taelon finds himself fascinated by the small human woman who—despite all she’s suffered—can still laugh and tease and lure smiles from him. Friendship swiftly grows between them as they work together to evade soldiers intent on capturing them and find themselves hunted by mystifying preternatural beings. Through it all, Lisa steadfastly remains by his side, stealing more of his heart each day while she helps him unravel the mystery of his sister’s fate. Can they find his sister before the hunters find them? If they survive their quest, will Taelon have to bid Lisa farewell… or can he coax her into leaving her planet and joining him for the adventure of a lifetime?

Now there’s no need to read the Immortal Guardian books prior to starting this series, as it can stand on its own. However, I must warn you once you read this book you will be tempted to read the books from the Immortal Guardian series. The story introduces Taleon of Lasara who is preparing for a mission to earth to find is sister Amariska.  In book one of the Immortal Guardian series the reader was introduced to Amariska and received her full story in the second book.  Taleon upon reaching Earth was captured and subjected to a myriad of torturous experiments. Lisa, a graduate student seeking to earn additional funds to help make ends meet too part in several research studies. The latest one involved a study of psychic talents. During a round of testing Lisa was rendered unconscious, with her waking eight months later to find herself in a strange and precarious situation. The one thing giving her hope was her psychic link to the man being held prisoner in another section of the facility.

Wow! What a ride. The Lasaran took the reader on a journey filled with romance, intrigue and humour. Some events noted here coincided with incidents which occurred in the Immortal Guardian series. Majority of the story took place on earth with the reader being treated to suspenseful moments and unexpected twists.

I enjoyed getting to know Taleon and Lisa. Lisa turned out to resilient, smart and brave, the kind of heroine I enjoy reading about. I loved the chemistry between these two and their lively interactions. Their romance despite its complicated nature was sweet and downright adorable.

I chose to listen to the audio version which I have done for all the books I have read for Duvall.  Kristen Potter is her narrator of choice, and I can see why. She breathes life into the story.

Overall, The Lasaran was a great start to the Aldebarian Alliance series.  I recommend this to fans of Immortal Guardian series and lovers of sci-fi romance.

Dianne Duvall is the New York Times and USA Today Bestselling Author of the Immortal Guardians paranormal romance series. Her debut novel Darkness Dawns, Book 1, was nominated for the RT Reviewers’ Choice Award for Best Vampire Romance by RT Book Reviews and for Best Paranormal Romance – Vampire by The Romance Reviews. Night Reigns, Book 2, was declared an “utterly addictive” Top Pick by RT Book Reviews and was nominated for Best Paranormal Romance 2011 by The Romance Reviews. Phantom Shadows, Book 3, was named a Top Pick by both The Romance Reviews and Night Owl Reviews. Her Immortal Guardians novella “In Still Darkness” was released in the Predatory Anthology in May 2013. Darkness Rises, Book 4, was also nominated for the RT Reviewers’ Choice Award for Best Vampire Romance. Night Unbound, Book 5 in the series, will be released on September 2, 2014. When she isn’t writing, Dianne loves all things creative. When her nose isn’t buried in a book, she is very active in the independent film industry and once even appeared onscreen as a machete-wielding maniac not unlike the vampires she so loves to create in her novels.

Nadene is an avid reader. A family friend introduced her to the fantastic world of reading with a gifted copy of Wuthering Heights. Her love of books have thought her a lot through out the years. She loves the experiences she gained through the pages of the books shehad the opportunity to read. She is never without a book and will read just about anything as long the material is compelling enough to hold her attention. She created this blog to share her love of books with like minded individuals and she hopes that in sharing her reviews visitors to the blog will discover their next addictive read. When she is not reading, she enjoys cooking, listening to music and watching television.

Reading this book contributed to these challenges: