Today it is my pleasure to Welcome author Mel Teshco to HJ!

Hi Mel and welcome to HJ! We’re so excited to chat with you about your new release, The Virgin Hunt Games volume 1!

Thanks so much for having me here, what a great place to hang out 🙂 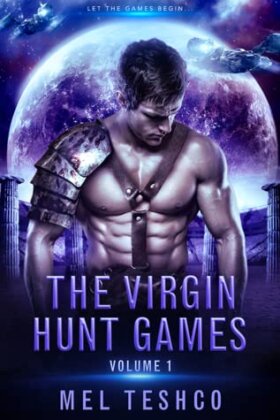 Take one six story tower set inside a huge amphitheater. Then add 10 alien men (hunters) and ten women (hunted) – one of whom is a human, and set them loose inside the tower, where each level has different backdrops and dangers. This makes the Virgin Hunt Games, a deadly once-every-four-years event where only the brave or the desperate enter. If they survive to tell the tale.

Prince Damon Banscott of Saberlynth scowled as he peered out through bamboo shutters from the first floor of the central tower’s holding room, where he and nine other hunters were confined.
The sun had long since burned through the chill of dawn, its egg-yolk brilliance pulling free from the uppermost level of the surrounding amphitheater to illuminate a ninety-thousand strong audience.

The hero, Damon, first sets eyes on Melody (she has silver-blonde hair, a very rare feature in the future) when she steps out onto the hunted platform. He knows immediately she is the one he wants.
Melody senses someone’s eyes on her but she has no idea which hunter until Damon steps out onto his platform alongside the other nine hunters. All her instincts clamor that he was the man watching her. That she is attracted to him, too, is all too apparently thanks to her body’s instant response.

Her concentration lapsed for a moment and she overbalanced, dropping into the water. For a split second she froze, and panic roiled through her, nearly suffocating her. Memories flooded through her of another time and place where she’d been dragged down, down…
Then Damon lifted her effortlessly from the water, his chuckle filling her ears as she launched herself at him and clung to his back like a mollusk. Her mouth brushed against the side of his neck, inhaling his dark scent of wood and amber that was uniquely alien, uniquely Damon. At once the horrid flash from the past faded, replaced by something far more carnal.
More shivers pulsed through her. This reality was so much nicer. And at least the dunking had washed away any blood. With a breathless sigh, she leaned close to him and pressed a deliberate kiss to the top of his throat, the tip of her tongue touching the strong column, tasting his slightly salty male skin.
He stiffened, his breath hissing sharply as he twisted to face her. His eyes glittered, and one of his big hands clasped her ass, his other hand cupping the part of her jaw that wasn’t bruised. With a groan he bent his head and kissed her gently, a merging of lips and tongue that gave him free rein to taste and explore.
She was glad she still clung to him, because her legs certainly wouldn’t support her. They were weak and getting weaker by the second as she succumbed to his intensity, kissing him back and savoring his breath, the very taste of him. Like the finest whiskey overlaid with spices.
This was their first kiss, and its intimacy was as raw as sex, yet as profound as breathing.
At length, he dragged his mouth free so they could suck in some oxygen. “Jesus, Melody,” he said hoarsely. “I don’t think I’ll ever stop wanting you.”

I have so many! But if I was to choose just one it is where Melody faces the hard truth of why Damon entered the Games.

I have my own agenda for being here. Like you, I was enticed with something irresistible. But unlike you, it wasn’t credits. I have more than enough money.”
Her pulse skyrocketed, instinct telling her that whatever he was about to say would change everything. “What is your agenda?”
For a moment, he didn’t answer. Then he conceded fiercely, “To make Bastion Legada suffer, and then kill him.”
She froze, for a moment her every emotion unable, unwilling to comprehend the truth. When she finally found her voice, it came out harsher than gravel. “You used me to get to him?”
His arm tightened around her. “At first,” he admitted softly. “But then I got to know you and discovered how much I wanted to be with you—”
“Liar!” she snarled. “You chose me not because you liked me, or were even attracted to me. But because Bastion drew my color. You wanted to rub our relationship in his face. Not to mention it gave you a perfect excuse to kill him.”
When Damon didn’t deny it, and she sensed him look away, her heart broke in a million tiny pieces. Her voice lowered. “No wonder you were fine seeing me with other hunters. You really didn’t care about me at all.”
“You don’t believe that.”
She pulled away from him to sit, but dizziness from learning the truth as well as the blackness pressing down on her kept her immobile for a little longer. “I’ve been such a fool.” She shook her head.
“I can’t be with you.” She rose to go…anywhere else.
He caught her arm and kept her in place. “You’re not leaving me. Not now. If I have to force you to stay, I will.”
She stiffened. “I’m not your prisoner, Damon. Don’t make me hate you. We agreed when the time was right, you’d let me go.”
His laugh was throaty, amused. “Do you really think I’d allow another hunter anywhere near you now you know the truth? And you’ll never hate me, blondie. I’ll make sure of that.”
“What do you—”
She jumped at his touch between her thighs. Goddess help her, even fully clothed, the press of his hand on the most intimate, needy part of her was thrilling

It would have to be the setting. The six story tower with all the different and dangerous levels, as well as the huge amphitheater for the live audience.

A huge screener behind the crowd lit up and showed snatches of the rapt audience—human, alien, male, and female. There were even some teenagers amongst them, staring wide-eyed up at the huge tower where the hunters and the hunted stood and waited.
The same tower inside which the Games would take place for seven days. She’d heard the colossal tower contained six vast floor levels, each elaborately set up with a different environment, showcasing six dangerous scenarios for the contestants to overcome.
A slick-looking male presenter pushed past Melody and the other women, then slid open a small side door and stepped out onto the main platform into the crowd’s view. A floater camera moved through the air to hover just yards away from Mr. Slick. The moment the screener showed him up close and personal, the roar of the crowd intensified, raising the hairs on the back of Melody’s neck.
The presenter put his hand up for silence. His stylishly-coiffed silver-gray hair was brushed back from his arrogant face, his white jacket gleaming under the bloated sun that was slowly rising in the cloudless sky.
“Earth and alien people, I am Jackson Conway, and I’m pleased to welcome you all to the Virgin Hunt Games, the biggest show in the galaxy!”
The applause and shouts were thunderous, the anticipation from the audience so thick it was palpable.

if they loved the Hunger Games and The Maze Runner, and if they also enjoy sex being an integral part of the story.

I’m working on volume six of The Virgin Hunt Games, with each book in the series showcasing all new characters with different settings on each of the tower’s levels. I’ve also recently released Mutant Unveiled, a post apocalyptic story where humans are the bad guys and mutants are the good guys who are hunted down. I am also close to finishing a contemporary story, Resisting the Firefighter. My hero is one of three brothers. Two author buddies of mine are writing the other brothers’ stories. We love working together and I think that is reflected by the success of our boxsets.

To enter Giveaway: Please complete the Rafflecopter form and Post a comment to this Q: Thinking outside of the box, if you had a (defective) power that might help protect you against other hunters and hunted inside the tower, what would it be?

Melody Simmons desperately needs to fill her bank accounts with credits that could help her family climb out of near poverty. And in the Virgin Hunt Games, that means enticing as many hunters as possible to bed her. The downside? Billions of viewers from all parts of the galaxy would be watching her fall from virtue with avid interest.

Alien Damon Banscott despises everything about the Virgin Hunt Games. Except the fact he can now legally destroy his enemy in the games. He is in this only for revenge. Then Damon sees one of the beautiful hunted and, for a moment, his heart stops beating. He’ll fight to the death before allowing another hunter to touch and deflower Melody.

But while the hunters get more credits by pleasing their captive mate sexually, the hunted women received more by finding their pleasure with any of the hunters who weren’t their assigned mate.

Mel Teshco loves to write scorching paranormal, sci-fi and contemporary stories. Not easy with five cats, two dogs and a fat black thoroughbred vying for attention, especially when Mel’s also busily stuffing around on Facebook. With only one daughter now living at home to feed two minute noodles, she still shakes her head at how she managed to write with three daughters and three stepchildren living under the same roof. Not to mention Mr. Semi-Patient (the one and same husband hoping for early retirement…he’s been waiting a few years now…) Clearly anything is possible, even in the real world.
Website | Facebook | Twitter | | Instagram |