Her Turn by Allison Jones: Beginning with the death of her narcissistic mother 10 years prior to 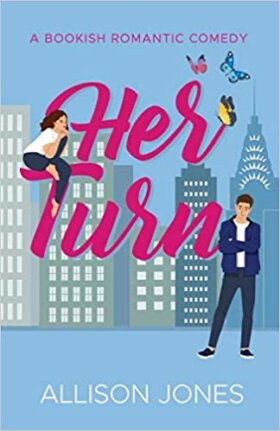 establish some context, Addie is fired from her job and uses the experience to motivate her to achieve her dream of finishing her novel. 3 months later, Addie’s novel takes the world by storm and for someone who is used to living a bit of a hermit’s life decked out in tights with pocket chocolate, the limelight isn’t something she’s comfortable with, or indeed has the wardrobe habits to seamlessly navigate.

Naturally, a publicist and stylist are hired to support her through the adventures, including book signings, launch parties and press conferences. And of course, her publicist Jameson, aka ex-military guy immediately grabs her attention, whilst George provides her with some fashion lifelines and a solid friendship that ensues. On the side, Addie is being extorted by her cousin Matthew and his wife Dorothy who are painted as poor adult versions of the super popular kids in high school – and who obviously haven’t grown out of the entitlement their previous social status afforded them.

As Addie is thrust further up the celebrity ladder, she desperately tries to ensure her number one priority is protecting her younger brother Owen who has Down Syndrome and who she has full guardianship of whilst at the same time navigating some serious family issues that comes as a result of her sudden fame and the cash that goes along with it.

Throughout, the narrative voice was a little unclear, vacillating from first person perspective to moments of second person narrative wherein the characters would break out and seemingly comment to the audience. At times this didn’t work and served to confuse the focus a little as each of the characters by and large sounded the same. This was also evident in the dialogue and at times it was a little confusing whose chapter and perspective was being explored. Interestingly, there would be some moments wherein tension was created relatively effectively leading up to an event but then the event itself would be skipped and in it’s place a simple recount or a description of how the characters felt about the event rather than letting it unfold naturally.

Ultimately, this was a little infuriating, as there was some solid potential in the plot and action kernels despite their unbelievability and weak execution. For the most part, Addie was likeable enough, as was Jameson, Owen, Nina and the other minor characters irrespective of their similar construction, and the romance that developed was relatively solid. Sadly, the sexual references and language used to describe genitals was a little bizarre and didn’t really mesh with the age bracket of the characters or the complexity of their lives.

Summarily, Addie’s turn turned out to be far more complex than she bargained for and whilst there were occasional moments throughout that oozed potential, narrative style and characterisation prevented Her Turn from hitting the mark.

Addie Snyder’s first novel is becoming an overnight sensation. Unprepared for being thrusted in the limelight, she is desperate to shelter her brother, Owen, who has Down syndrome. After her father abandoned them when Owen was just a baby, she is his sole guardian after her mother passed away. She must protect him from the harsh world, but how can she do that with public events coming up? An unlikely ally in her cold and emotionless publicist, Jameson Ford. As a former Navy Seal, Jameson has his own demons, but there is something about Addie that defrosts his icy wall. Together, they navigate the twists and turns as her book becomes a world-wide phenomenon.

Her life becomes even more complicated when her long-lost father arrives threatening to take Owen away from her and her distant relatives trying to hoard in on Addie’s success. But, through the drama, Addie maintains her humor while popping chocolate kisses as if they were Xanax and seeking solace behind her computer creating stories that fill her soul. Even though all of her dreams are coming true, no one can prepare her for what lies ahead. It’s true when they say, be careful what you wish for.