Today it is my pleasure to Welcome author Denise N. Wheatley to HJ!

Hi Denise and welcome to HJ! We’re so excited to chat with you about your new release, Love at the Icicle Café! 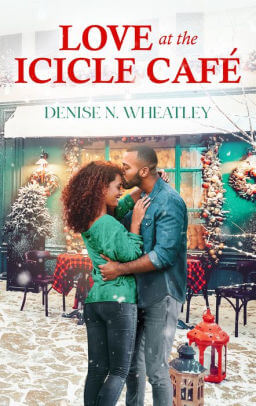 LOVE AT THE ICICLE CAFÉ tells the story of Mina and Scott, two former army brats who grew up in a small German town called Gosberg. Their parents are business partners and own a popular Gosberg bistro called The Icicle Café, which they’re ready to sell. Mina, who’s now living in California and working as a high-powered patent attorney, is happy for her parents’ retirement. Scott, however, serves as The Icicle Café’s executive chef and wants nothing more than to keep it in the family.
When Mina returns to Gosberg to help facilitate the sale, she’s forced to face Scott’s resistance. But as the former friends spend time together, their icy relationship thaws. Scott asks Mina to extend her trip and help plan the café’s Icicle Festival. She agrees, and the magic of the holiday season leaves the pair wondering whether there’s a future for them in the snowy village of their past.

“You know,” Mina began, “there are times when I do miss Gosberg. The beautiful snowfalls, the townspeople that feel more like family…there’s a coziness to this place that you just don’t get living in the city.”

Mina was overcome by a sense of comfort within her father’s embrace.

“I was just being a queen, straightening my fellow queen’s crown.”

Mina spun around on her heels and sauntered toward the back of the café, adding a little swing in her hips as Scott watched her walk away.

The main inspiration behind this book is my love of Christmas. I wanted to write a romance that truly captured the spirit of the holiday season; one that celebrates love, family and friendship. I was also motivated to create realistic characters who appear to have life completely figured out, but underneath it all, are reevaluating their goals and plans for the future.

Mina, the book’s heroine, is very ambitious and headstrong, and fiercely loyal with a soft side. She’s dating a fellow attorney and on the cusp of making partner at her law firm. Her life looks great on paper, but in reality she’s struggling in her relationship and facing some pretty tough adversities at work.

Scott, the book’s hero, is outgoing and hard-working, passionate and very connected to the Gosberg community. He’s consumed by The Icicle Café, which hasn’t left him much time for a personal life. His focus is on expanding the Icicle brand, which is why he’s so devastated after finding out the café is up for sale.
I got to know these characters as book’s plot developed. They almost wrote their own stories when they were put in situations that forced them to make tough decisions. I was honestly surprised by Mina’s bravery when it came down to some of the choices she made.

I loved writing the scene where Mina finally begins to warm up to Gosberg after reluctantly returning to her hometown. She’s hanging out at The Icicle Café with Scott and his manager, Mary, when asked to extend her trip and host an event for the townspeople. Here’s a snippet:

“I know how to build fantastic gingerbread houses,” Mina said, “courtesy of my mother, of course. Maybe I could lead the workshop.”

Scott eyed Mina skeptically. “Do you think you’ll still be in town this weekend to lead the workshop?”

“Oh, wait,” she replied quietly. “I forgot about that. Why don’t we wait and see how things go? I may have to get back to California…”

“But you can’t leave,” Mary insisted, tugging at Mina’s arm. “The townspeople would go crazy over a gingerbread house workshop.”

“I second that,” Scott agreed. “You know what would be even cooler? If Mina stays, we could turn the workshop into a contest. The person with the best gingerbread house wins a private baking lesson with her.”

Mina felt a twitch in her chest at the sight of their hopeful expressions. Unable to resist, she abruptly blurted out, “Okay. I will.”

“Yes,” Scott said, pumping his fist before running around the counter and heading to the front of the restaurant.

“Attention everyone,” he called out. “We just decided on a theme for this weekend’s workshop. For the first time ever, we’re going to teach you how to make a gingerbread house. And by we, I mean our resident celebrity guest baker, Mina Richards!”

The crowd broke out into a flurry of cheers. Mina clutched her hands together and smiled brightly, flattered by their reaction. For the first time since arriving in Gosberg, returning home to California was the furthest thing from her mind.

The most difficult scene to write involved a heated conversation between Scott and Mina. He’d invited her to his home for dinner, and things got heated when he accused her of being out-of-touch with the Gosberg. Here’s a snippet:

“Scott, you are amazing,” Mina gushed. “Why aren’t you working as an executive chef at a high-end restaurant in Paris or New York? You could be doing so much more than just managing our parents’ little café.”

He dropped the bag of groceries down on the counter. “Our parents’ little café? Is that what you think of it? Mina, The Icicle Café is where it all started for me. That place enabled me to realize my dream of becoming a chef. And while I do have a classical culinary education, the café is where I truly honed my skills.”

Her expression grew solemn as she reached inside the bag and pulled out her ingredients. “I’m sorry. I didn’t mean to offend you. And I certainly didn’t mean to talk down about the café or your efforts. It’s just that—”

“You didn’t offend me,” Scott interrupted. “I heard the compliment within your statement, and I appreciate it. I also get that someone like you, who lives this big life in California and has cultivated a career in law, would think that working in some fancy restaurant is more meaningful than running our parents’ little café. But since you’ve been away from Gosberg for so long, I don’t think you truly understand the significance and value of The Icicle Café. At least not anymore.”

Mina slammed a bag of flour down onto the counter. “That is far from the truth, Scott. Just because my dreams kept me away from Gosberg doesn’t mean I don’t recognize the café’s worth. So please don’t make me out to be some uppity, out-of-touch snob because I’m motivating you to think bigger and chose to pursue a career in law.”

“Speaking of which, how’s that working out for you? Did they name you partner during that conference call today, or are you still being strung along?”

Mina froze. She glared at Scott, who’s steely eyes were staring right back at her. Several moments passed, and they both remained silent. When he opened the bottle of wine, poured himself a glass and took a long gulp, she spun around and stormed into the living room.

“You know what?” Mina exclaimed, “I didn’t come here for this.” She snatched her coat off the rack and threw open the door.

Right before she walked out, Scott grabbed her hand.

This book definitely showcases my writing style. I love penning descriptive paragraphs tucked in between snappy dialogue and the characters’ physical/emotional reactions. I also enjoy writing sweet romances that still manage to evoke sexual tension, and offer up unexpected twists and turns. I think LOVE AT THE ICICLE CAFÉ embodies all of those traits.

I hope that LOVE AT THE ICICLE CAFÉ will leave people feeling inspired and fulfilled. I’d love it if the characters’ courage motivates readers to fight for what they want out of life, and reminds them that it’s never too late to pursue a passion or chase a dream they thought had expired.

I just finished editing a sweet holiday romance for Tule Publishing called CHRISTMAS IN FULL BLOOM that hits shelves in December 2021. It’s about a floral designer who returns to her hometown for her sister’s winter wedding and unexpectedly reconnects with an old crush. I’m currently working on a romantic thriller for Harlequin Intrigue called CAPTURED AT CHRISTMAS. It tells the story of an investigative journalist who’s covering the bizarre disappearance of her old college roommate. The book is a classic case of whodunit as the victim’s narcissistic husband, sociopathic twin brother and government coworkers are all suspects.
As for my upcoming releases, I’ve got a contemporary romance called SHE GETS WHAT SHE WANTS coming out on March 8, 2021 via Tule Publishing. It’s the first book in my FEARLESS FAIRYTALE series and introduces a timid, small-town woman who throws caution to the wind after getting her heart broken by abruptly moving to LA and bravely chasing her dream of becoming a television writer. My romantic thriller COLD CASE, TRUE CRIME hits shelves in June 2021 via Harlequin Intrigue. It follows a popular true crime blogger as she teams up with a detective to help solve the cold case of a murdered high school friend.

Giveaway: An ebook copy of Love at the Icicle Café & 3 Tule ebooks

To enter Giveaway: Please complete the Rafflecopter form and Post a comment to this Q: What is your favorite romance subgenre (sweet, steamy, paranormal, suspenseful, etc.) and what do you love most about it?

Excerpt from Love at the Icicle Café:

Can an icicle-themed festival thaw the most unlikely hearts?

California lawyer Mina Richards spent her childhood helping her mom bake at their winter-themed café in the snowy village of Gosberg, Germany. When her retired parents want to sell The Icicle Café, Mina returns to facilitate the sale. She needs this to go right—she’ll fly in, finalize the deal and fly out to rescue her once high-powered career. But faced with Scott, her childhood friend and crush who doesn’t want to sell, Mina’s plan quickly falls apart.

Rising chef Scott Dawson has turned The Icicle Café into a destination restaurant. His parents and their partners want to sell the café to a hotel chain, and Scott can’t meet their price. When Mina arrives—more beautiful and determined than ever—he sees the possibility of a new future for the business and the town he loves. He just needs to change her mind…about more than selling the café.

When Scott asks Mina to help with the café’s annual Icicle Fest, their icy relationship warms. Can these former friends find a future together in the snowy village of their past?

Denise N. Wheatley is a lover of happily-ever-afters and the art of storytelling. She has written (and ghostwritten) numerous novels and novellas that run the romance gamut, from contemporary to paranormal, sweet to steamy. Denise strives to pen entertaining stories that embody matters of the heart, while creating characters who are strong, colorful and relatable.

She is an RWA member and received a B.A. in English from the University of Illinois at Chicago, the city where she was born and raised. When Denise is not sitting behind a computer, you can find her in a movie theater, on a tennis court, watching true crime television or chatting on social media.
Website | Facebook | Twitter | Instagram | GoodReads |