Today it is my pleasure to Welcome author Melanie Milburne to HJ!

Hi Melanie and welcome to HJ! We’re so excited to chat with you about your new release, Breaking the Playboy’s Rules (Wanted: A Billionaire Book 2)!

Hello! Great to be here! 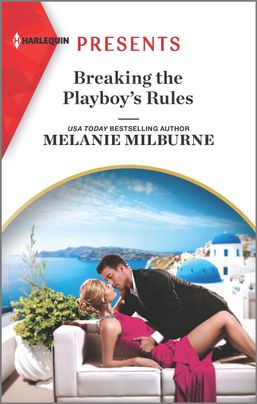 This is Book Two in my Wanted: A Billionaire trilogy. I wrote the trilogy during our first eight week lockdown. It was a wonderful way to spend a lot of time with all three sets of characters, and I have to say, probably the easiest period of writing in my career. No distractions!

I wanted to set up for the reader the way Millie feels about Hunter Addison right from the get-go. They had a disastrous blind date set up by mutual friends and took an instant dislike to each other, mostly because of their particular circumstances that fateful night, which coloured how they saw each other. Interestingly, in the couple of months since their blind date, there had been nothing in the press about his sexual antics. Maybe Millie’s immunity to his attractiveness that night had bruised his overblown ego. Not flipping likely. Men like Hunter Addison had industrial strength egos. Trying to put a dent in his ego would be like trying to crack a brazil nut with a feather boa. Not going to work.

My editor asked me to write a heroine-led trilogy, so I had a great time coming up with three girlfriends who lived in a flat together in London. I had a strong sense of Millie from the start and Hunter revealed himself to me as we went.

The process of getting to know a character is a little like getting to know a person in real life. I find it’s best to spend some blocks of time with them, asking them questions and seeing how they answer. I often have an idea of how a character will be, how they will act, etc and then they decide they want to be different. It is kind of weird, I know, but as soon as I give them names, they really do become real to me.

I really enjoyed writing most of the scenes in this book but I did really love writing the opening ones. Here’s a snippet of where Millie finally asks Hunter to act as her mother’s divorce lawyer.

Millie met Hunter’s gaze. ‘Because I’ve heard you’re the best.’
One side of his mouth came up in a half-smile, as if he found her comment mildly amusing but of zero important to his estimation of his competence. One of his muscled arms was draped casually over the back of his chair, one ankle propped over his strong thigh, just above the knee. Unlike her, he had cool and calm and collected down to a science. ‘And here I was thinking you were after a one-night stand with me.’ His voice was deep and smoky, his smouldering eyes doing a slow appraisal of her face and figure.
Millie face a stiff smile, showing no teeth. ‘Sadly, no.’
A single eyebrow rose again, his eyes glinting. ‘Sadly?”

The scene where Hunter introduces Millie to his disabled sister Emma. It is a delicate balance portraying characters with disabilities without cliché, as well as their carers.

I am always tweaking my style on each book- that’s how the writing journey works for me. Constantly challenging myself to write a better book each time. But mostly, it’s my normal style.

Apart from the simple enjoyment of a happy ever after romance, I would like readers to take a moment to think about those who love and care for siblings with disabilities. It is a lifelong commitment that is so important and yet so unnoticed and undervalued in the community. To me, Hunter’s love for his sister Emma made him one of my favourite heroes of all those I’ve written.

I am currently working on a twin duet. I’m taking a lot longer writing it than I normally would but that’s the festive season for you! I have Book Three of the trilogy out in March – One Night in New York and then my matchmaker novel- The Billion Dollar Bride Hunt out in June.

Giveaway: Giveaway- Book one and two of the Wanted: A Billionaire trilogy.

To enter Giveaway: Please complete the Rafflecopter form and Post a comment to this Q: Hunter whisks Millie away on his luxury yacht to Greece. If you were to be whisked away, where would you like to go?

Excerpt from Breaking the Playboy’s Rules (Wanted: A Billionaire Book 2):

A spark she can’t forget…

A Greek getaway to remember!

Millie refused to enjoy her blind date with outrageously attractive lawyer Hunter. After the pain of her last relationship, how could she let herself? But when her mother needs his help, Millie must face Hunter again. This time, she can’t deny he makes her heart race…

For their second meeting, Hunter turns the full force of his charm on Millie. He’s normally a closed book—he’s learned to keep his family commitments private. But sweeping Millie off to Greece to explore their unmatched chemistry is breaking all of his rules…

Melanie Milburne read her first Harlequin at age seventeen in between studying for her final exams. After completing a Masters Degree in Education she decided to write a novel and thus her career as a romance author was born. Melanie is an ambassador for the Australian Childhood Foundation and is a keen dog lover and trainer and enjoys long walks in the Tasmanian bush. In 2015 Melanie won the HOLT Medallion, a prestigous award honouring outstanding literary talent.
Website | Facebook | Twitter | Instagram | GoodReads |