Today it is my pleasure to Welcome author Annie West to HJ!

Hi Annie and welcome to HJ! We’re so excited to chat with you about your new release, The King’s Bride by Arrangement!

A big, warm hello to you all from Australia. Here’s hoping the new year brings us all better times! 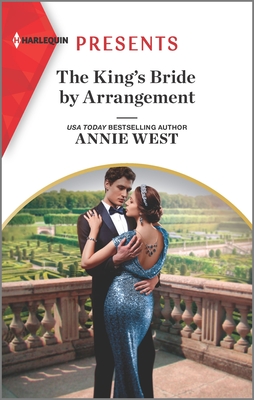 It’s a story of unrequited love, seduction and Cinderella. Eva loves Paul but he thinks she’s marrying him out of duty. So it begins with Eva’s unrequited love. Seduction comes unexpectedly when Eva decides, in a moment of stress, to take what she wants – a night with Paul, since she can’t have the lifetime with him she’d hoped for. And it’s Cinderella, even though Eva is already royal, because it’s a story of awakening and transformation. Through the book Eva grows into herself, becoming the woman she was afraid to be before. The new Eva makes Paul change too. They both begin the story, saddled with the terrible weight of a difficult past, but together find not only love and a way forward.

Eva is head over heels in love with Paul and the last sentence of this quote gives Paul’s response to her – respect but apparently no spark. I love beginning a book where the heroine seems to have no hope of achieving what she wants:

Then King Paul, the man she’d been betrothed to for four long years, clasped her hand in his and curled his other arm around her back. Heat shimmered everywhere he touched and Eva froze, fighting hard not to respond.
For a second longer they stood, toe to toe, gazes locked, separated by the precise distance decreed by royal decorum. Then, as the music swelled, Paul swept her into a waltz with the superb grace of a natural athlete and all the warmth of an automaton.

This book came about because so many readers contacted me after finishing ‘Revelations of a Secret Princess’ and asked for a follow up story. Some specifically asked me what happened to Caro’s brother Prince Paul. That made me put my thinking cap on and work out what his story was. As soon as I started to explore his world, and especially Eva’s, I was hooked!
Other than that a range of things played their part in the creating this world:

I start writing with a pretty good idea of who my characters are and what they feel. Even so, they always come more alive on the page as the words appear, and yes, some of what they do and say just arrives on the page without me expecting it. Like Paul’s long ago attempt to kiss Eva and her rejection. Each had their own interpretation of that event and each brought me closer to understanding them. I knew Eva had hidden strengths but both Paul and I were surprised at the woman we discovered!

When Paul asks Eva what would make her feel better and she tells him:

‘Eva? What are you saying?’
Her lips firmed as she fought despair with anger.
‘You heard me, Paul.’
She wasn’t going to say it again. Even though it was true. The one thing that, at this moment, would make her feel better was Paul’s lips on hers. Blotting out tonight’s bitter regrets and searing hurt. Giving her the solace of his caress.
His frown was back, deeper than ever. His hand beneath her chin moved to her shoulder. To hold her at a distance or to deliver a paternalistic pat of solace? As if she didn’t know her own mind.
He’d asked what she wanted and she’d told him.
Abruptly, gloriously, she didn’t care what he thought. Only that this was the last chance she’d ever have to kiss the man she’d adored since she was fifteen. The man who’d cracked her heart wide open and didn’t even know it.
Tomorrow, later this morning, she’d say goodbye to him forever. For now they were alone and she still wanted so much more than he’d ever give her.
Instinct told her to grab this opportunity for just a moment’s solace and that’s what she did. One hand settled on that hard, straight shoulder, the other curled around the back of his neck, learning the texture of hot skin and soft hair. She rose on her toes and pulled his head down.

I was just looking at reviews for this book and found this: “Sensual, sexy and emotionally engaging, The King’s Bride By Arrangement bears all the marks of a good Annie West novel”, and I’ve had others pointing out that emotions, glamour and characters are in the style of my previous books, which they like. I suppose the departure was the fact this one starts with a heroine who has suffered from unrequited love for a long time. She so had my sympathy.

2020 was a really, really tough year, wasn’t it? So I’m hoping this book brings a spark of real joy, a story people can lose themselves in and a world that’s a fun place to visit. I especially hope people get that warm, squishy feeling that a good romance delivers.

I’ve been very busy writing. After King’s Bride, look out at the end of Feb/beginning of March for ‘The Sheikh’s Marriage Proclamation’. That one is full of drama and passion with exotic locations and some desert sizzle. In April/May it’s ‘Pregnant With His Majesty’s Heir’ when strangers finding solace from difficult times face a huge scandal and lifechanging options. In Aug/Sept look out for ‘A Consequence Made in Greece’ with one of the cheekiest heroes I’ve ever written.

Giveaway: This is an international giveaway – THREE WINNERS will each receive a signed Annie West paperback, their choice from my backlist titles – that’s 41 titles to choose from!

To enter Giveaway: Please complete the Rafflecopter form and Post a comment to this Q: I love a good royal romance, but I’d like to do a quick survey to see what you all think. Who already loves royal romances? If you do, maybe tell me one thing (it could even be just a word) that you like about them. If you’re not already a royal romance fan, what romance trope (eg. Secret baby, boss/secretary, enemies to lovers etc) might convince you to pick up a royal story?

Excerpt from The King’s Bride by Arrangement:

He’s the only man she’s ever loved!

Paul’s rebuilt his country after his father’s destruction. His ultimate act of kingship is releasing Eva from their convenient arrangement. Until a scandalous photo requires them to continue their betrothal…and an explosive kiss has Paul questioning everything he thought he knew about his royal bride!

USA Today Bestselling author Annie West loves writing passionate, intense love stories. She has devoted her life to an in depth study of tall, dark, charismatic heroes who cause the best kind of trouble in the lives of their heroines. Creating heroines who are a perfect match for those strong, stubborn men is one of her all time favorite things. As a sideline she’s also researched dreamy locations for romance, from vibrant cities to desert encampments and fairytale castles. She lives on the east coast of Australia and her favorite things are books, good company, good food and travel.
Website | Facebook | Twitter | Instagram | GoodReads |