Daddy Undercover (Crescent Cove #9) by Taryn Quinn is the ninth book in her Crescent Cove series. Gina and Jared’s 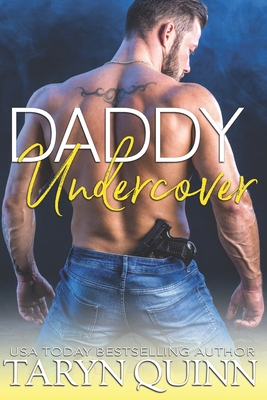 story is a delightful friends to lovers tale.

Gina Ramos is a waitress at the Rusty Spoon in Crescent Cove, NY. Her best friend is Sheriff Jared Brooks. Right in the middle of her busy shift at the Rusty Spoon she gets a call from Jared asking her to come to his house ASAP. But he wouldn’t tell her why he so desperately needed her. Gina got to Jared’s at quickly as she could. After all best friends always have each other’s back. What she found at Jared’s was a real shock. Jared needed her help alright – with his two-month-old baby daughter who seemed to have appeared from out of thin air as far as Gina knew. This would take some explaining. The baby was adorable but since Gina had fallen in love with Jared the appearance of his offspring really was hurtful. Sure she didn’t tell Jared how she felt. She didn’t want to ruin their friendship if he didn’t love her back. So where do they go from here?

As the sheriff of Crescent City Jared Brooks felt he was equipped to handle anything and everything. Until he finds a baby in a basket left at his front door. Seems that weekend fling he had at the law enforcement conference in New York bore fruit. He would never have guessed that the woman he slept with would abandon their baby on his doorstep. So here he is an instant father to two-month-old Samantha Mae. He knows nothing about taking care of a baby. Good thing his best friend Gina Ramos is willing to step in and help with Sami. Oh man! Gina is a natural! She’s the perfect mother for Sami and the perfect woman for him. Why did it take him so long to realize he was in love with Gina?

The author brings their personalities to life with entertaining dialogue, perfect family moments, sweet scenes and some super hot sex scenes. This storyline flowed smoothly and kept me quite entertained. The secondary characters which include family members kept the fun going. I liked the instant protectiveness Jared’s Golden Retriever Sadie felt toward baby Sami. Typical for the breed. This was a really fun read.

A baby in a basket left on a doorstep is such a clich�…It’s also my life.I carry a gun and a badge and help keep order in small town Crescent Cove. What I don’t do?Change diapers.Sing songs about sharks.Or…ask for help.But my best friend, Gina Ramos, knows I’m in over my head. She’s the only one keeping me sane. And playing house with her is starting to feel way too real.And get way too hot.Because the biggest thing I don’t want to do?Is to lose my best friend…or find out my little girl isn’t really mine.Author’s note: This daddy isn’t just undercover…he’s clueless he has a baby! Daddy Undercover is a standalone romantic comedy with a HEA ending and no cliffhanger.