Today it is my pleasure to Welcome author Jeannie Watt to HJ!

Hi Jeannie and welcome to HJ! We’re so excited to chat with you about your new release, Once Upon a Winter Wedding! 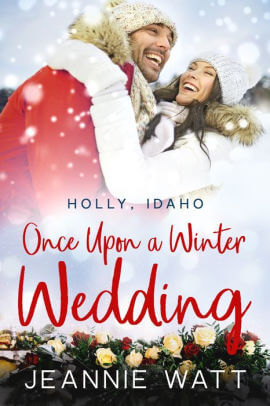 A Home for the Holidays is a sweet holiday romance that I’d been itching to write for a while now.

Jason Regan grew up on the go. His parents are archaeologists, and he traveled the world with them as a kid. The longest he’s ever stayed in one place was the four years he spent living with his aunt in Holly, Idaho during high school. He’s currently a consulting engineer, still traveling the world. He returns to Holly to pay a long overdue parking ticket, however, instead of fining him, the judge sentences him to 100 hours of community service in Tess Evan’s animal shelter, Forever Home. This throws a big crimp in Jason’s ignore-the-holidays-and-work plan.

Tess gladly left her urban law practice three years ago to return to Holly to take over her late grandmother’s animal shelter. She knows that she’s found her true calling. She loves being close to her family and she loves her job. Unfortunately, she’s also falling in love (again) with Jason Regan, whom she crushed on in high school—a man who, by his own admission, doesn’t know how to call one place home. Suddenly there’s a wrinkle in her perfect life.

Can the magic of the holidays and a spunky little terrier named Neville bring Jason and Tess together?

I enjoyed Jason, the confident engineer, squirming as he realizes that his parking ticket was going to cause him more trouble than anticipated.

Judge Nelson put the pen back on his desk and then leaned forward, resting his arms on the bench in front of him. “Jason, I’ve thought long and hard about this.”
Jason’s stomach tightened. He’d been in front of the bench for approximately two minutes, so there’d been no time for long, hard thinking, which meant that the judge had thought this over before Jason stood before him. A nasty sense of foreboding crept over him.

I’m a fourth generation Idahoan and I wanted to set a fun series in Idaho (most of my books are set in Montana where I currently live) so I created Holly, a little town about an hour away from Boise.

I am blown away by the dedication of those who work and volunteer in animal shelters and decided to make an empty-the-shelter event the centerpiece of the story. Also, I love Jack Russells, so the dog hero of my book had to be a Jack.

When I write, my characters tend to evolve on their own. I start with an idea of who they are, then I let them start talking and I discover things about them as I write. I didn’t know that Jason could build things. Despite being an engineer, I was going to have him lack practical building experience and be all thumbs as he helped repair the shelter building, but he had skills I wasn’t aware of. I didn’t know that Tess had had a secret crush on Jason during high school, but she did, which made working with him awkward. And I had no idea that my third hero, Neville the terrier, would turn into such a big part of the story. He and my hero really develop a bond.

My favorite scene is when the heroine accidentally confesses to a crush the hero knew nothing about.

This time she couldn’t stop her cheeks from warming. “Yes.” The word came out easily enough, but Tess had a bad feeling about the look of dawning recognition on his face. A bad feeling that got worse when he suddenly smiled.
The jig was up.
“You were the girl who read in the corner of the cafeteria. Glasses and a braid. I helped you when you knocked that giant cup of Pepsi over and soaked everything. Melissa picked up her books and abandoned you.”
“Guilty.” So very guilty and embarrassed.
He smiled reminiscently. “Your friend Melissa and I shared a table in art class.”
“She talked a lot.” Tess spoke in a dark voice.
Jason gave a small laugh of acknowledgment. “She told me things I never wanted to know.”
The laughter stung and Tess tilted up her chin as her pride took over operations. “A lot of time has passed since then. Tastes change.”
Jason’s brow furrowed. “I guess so.”
Tess crossed her arms over her chest. “For the record I almost died when Melissa told the world that I was crushing on you, and I appreciate you not making a big deal about it back then. Thank you.”
The shift in his expression made her go still.
Tess’s arms tightened over her chest. “She told you…right?”
The slow shake of his head as he held her gaze, his expression maddeningly unreadable, turned Tess’s face into a veritable stop light.
“Well, it was no big deal,” she said stiffly.
“Of course not,” he agreed. One corner of his mouth tightened as if he was fighting a smile. “It was years ago, and”—he cleared his throat—“tastes change.”
Tess gave up on pride and pressed a palm onto her forehead. “Well, this is a nightmare,” she announced.

Actually, it was the scene where Tess is telling Jason about his duties in the shelter and he gets knocked down by a pack of dogs.

A smile lit her blue eyes, stirring something inside of him, like a bird lazily shaking its feathers. But before he could identify the sensation, she cleared her throat and said, “Is that a yes?”
He gave her a don’t-underestimate-me-because-of-the-khakis nod.
“Excellent.” She pushed her hair back from her forehead, and he noticed it was darker beneath the top strands, an interesting blend of brown and blond. Whiskey and wheat. “It needs to be both eye-catching and secure,” she continued. “I try to empty the shelter every year by Christmas, but this year I have a little more riding on it, and I want to make certain that every animal—”
The door behind him banged open, and before Jason could turn to see what had happened, something hit him square in the back of the knees, buckling them. He pitched forward, trying to avoid Tess, but she reached out in a futile attempt to help him keep his balance. They both went down as a scruffy white, black, and brown dog sailed over them, followed by a pack of little dogs who weren’t so talented at jumping. Small paws dug into Jason’s thighs and side as he automatically ducked his head, and he found his face very close to Tess’s. So close that he could see the little flecks of color in her horrified eyes.
“I’m so sorry.” A teenage boy leaped nimbly over the two of them as the dogs raced past him back into the kennel area, then bent to offer a hand. “Are you guys okay?”
“Yeah.” Jason got to his feet, while Tess took hold of the boy’s hand, allowing him to pull her upright.

I usually write cowboys, but I have been toying with the idea of writing funny, sweet contemporary romance for a while. This series represents my headlong dive into the genre and I really enjoyed it! Now I plan to split my time between cowboys and sweet contemporary.

I want people to close this book with a happy sigh.

I just finished up book three of the Holly, Idaho series. Book two, Once Upon a Winter Wedding is coming out on December 28 and is available for preorder. https://amzn.to/36Exyx3 V is for Valentine will be released on February 2.

Giveaway: An ebook copy of Once Upon a Winter Wedding & 3 Tule ebooks

To enter Giveaway: Please complete the Rafflecopter form and Post a comment to this Q: My heroine, Tess, became a lawyer because of practical reasons—job security, income, etc.—however, she really wanted a job in which she worked with animals. She found her dream job in Holly. What is your dream job?

Excerpt from Once Upon a Winter Wedding:

Can opposites attract and plan the perfect winter wedding?

Free-wheeling Stevie Evans is thrilled when her best friend announces she’s getting married and promises to help, never imagining she’d play wedding planner with her bestie’s uptight brother, Brant. She and Brant clashed several years ago and she’s avoided him ever since. But this time she can’t run or hide, and the buzz of attraction is stronger than ever.

Brant Gilroy’s meticulous life plan takes an unexpected turn when he hits a career bump on the same day as his sister’s wedding announcement. She wants to get married at the family tree farm, which he’s been restoring. Brant’s determined to make her day special despite his uncertain future, although he dreads working with her best friend—a woman who’s his complete opposite. So why can’t he get her out of his head?

As Brant and Stevie work together, Brant begins to wonder if they have more in common than they suspected. But how can he convince her that opposites can sometimes make the perfect team?

Jeannie Watt is the author of over 20 contemporary romances and the recipient of the Holt Medallion Award of Merit. She lives in a small ranching community—a place where kids really do grow up to be cowboys—with her husband, dog, cat, horses and ponies. When she’s not writing, Jeannie enjoys sewing retro fashions, running, and buying lots and lots of hay.
Website | Facebook | Twitter | Instagram | GoodReads |