Today it is my pleasure to Welcome author Abigail Owen to HJ!

Hi Abigail and welcome to HJ! We’re so excited to chat with you about your new release, The Protector!

Hi HJ and readers! Thank you so much for having me! 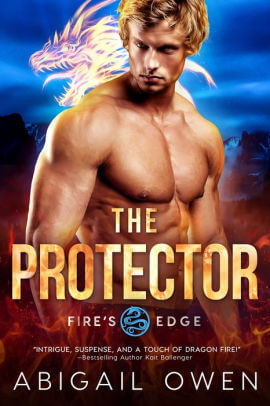 With the kings at war, the enemy is now coming for Lyndi…and her orphans. Levi will have to defy his king if he has any hope of protecting them all…and finally claiming his mate.

The jarring wail of a siren split through Lyndi’s sleep and had her jackknifing up in bed. Still, it took another second of blinking herself awake, the sensual haze of the dream that had plagued her for centuries taking a second to dissipate, before her brain fully engaged. She glanced at the clock on her bedside table. Three in the morning.
Another dragon fire.
Well…hell. These were turning into an almost weekly occurrence, and not for no reason. The team just didn’t know what that reason was yet.
Which was a serious problem.

He is immediately impressed that she would risk her position with her king to join her brother in the Americas.

She resists him from the beginning, because she’s attracted to the beginning. But his steadiness wins her over in the end.

Trying the handle, he found it unlocked and let himself in.
Then slammed to a halt at the sight of her standing, facing the door, eyes wide at his intrusion, tears streaming down her cheeks, glistening in the soft lighting.
Holy hell. Tears for him?
The breath in his lungs deserted him in a harsh whoosh, leaving him light-headed. With only a single thought—making those tears stop—he prowled across the room to cup her face in his hands, brushing at the damp streaks on her cheeks with his thumbs.
“I thought you’d be happy I’m leaving,” he said quietly. “You hate me.”
She huffed a laugh and rolled her eyes, the move so familiar he’d swear she was about to lay into him, only, vulnerable as she was, she could hide nothing of her reaction. He caught the slight quiver to her lips.
Driven beyond the limits of his control, he lowered his head and kissed her. Soft and sweet, trying to offer comfort. Trying his damnedest not to act on instincts that screamed at him to take it further.
With a whimpered sound, she scooted closer, wrapping her arms around him, opening under him, turning the kiss into something…desperate. Urgent.

The moment Levi realizes that Lyndi doesn’t hate him. Far from it. He’s ordered back to the king’s side and she cries at the thought of his leaving. It’s the first kiss scene as well, so check that out for the snippet!

Any of the scenes with Lyndi’s boys – both with her and with Levi. The family they’ve become, the trust and love, is central to this story.

If you love shifters, dragons, orphaned kids who become a family to each other, cave trolls, danger, crying, laughing, and a romance built over time!

I am wrapping up The Warrior King which is part of my crossover Inferno Rising series featuring the kings and phoenixes. That comes out in March. I’ve just finished the first draft on The Traitor, the next in the Fire’s Edge books, which will release next summer. Then, around March, I’ll get started on The Cursed King!

To enter Giveaway: Please complete the Rafflecopter form and Post a comment to this Q: If you could have a paranormal creature (like a cave troll) as a pet, what would you choose?

Excerpt from The Protector:

Without warning, a thick arm banded around her stomach and yanked her right off her feet and under a different bush. She landed with a grunt she managed to only make in her head, swallowing the sound down.
Levi put his lips to her ear, his whisper barely audible. “Don’t move.”
Barely, she kept from wiggling, going as still as a mouse in the jaws of a cat. Only he didn’t let her go. They sat on the ground, her between his legs, which were bent at the knees on either side of her hips, his arm still solidly around her, his hard-as-steel chest pressed tight against her back.
She never allowed herself to get this close.
Damn if instant heat didn’t swamp her, molten at the junction of her thighs, setting her to pulsing in time to her heartbeat and pushing the pain in her lower back clean out of her head.
No. No. No. No. Now was not the time to let this unspoken, unacknowledged, lethal thing she felt toward him hold sway.
Lyndi forced herself to remain motionless, closing her eyes and reaching for calm. Control.
But his own heat surrounded her along with that sweet scent of cigar smoke and the smoothest brandy, like earlier in the war room, just like his voice. Is that what his skin would taste like?
Not the first time she’d wondered.
“Are you okay?” he husked.
“Fine.” Or she would be as soon as she could get away from him.
Her wound wasn’t her biggest concern right now. All shifters had accelerated healing, part of what allowed them to live so long. By the time Drake gave the all clear, she wouldn’t be lying about that.
A low grunt told her Levi didn’t believe her anyway, but for once he didn’t push her. After a pause, his arm relaxed against her and he uncurled his fisted hand, his fingers flattening against her belly.
“Stay where you are,” Drake ordered. He must still be dragon to be communicating telepathically. Where was he anyway? “I’m going to check whether they’ve gone.”
Against her, Levi’s body eased infinitesimally. She wouldn’t have known if she wasn’t plastered against him. Stiffening, she went to sit away from him, but he tightened his grip. “Hold still.”
He was right. Until Drake gave the okay, she should hold exactly as she was.
“You’re trembling,” he whispered, lips still at her ear, breath tickling. His fingers, which she was horribly aware of, brushed against her lightly. She might as well have been naked the effect that small touch had, sending electric sparks of need hissing through her blood.
“Don’t,” she warned, voice low.
The fingers stopped and he stiffened against her, muscles going rigid.
Guilt, an emotion that had only grown over the years of keeping this man at a distance, overrode common sense. “I’m ticklish,” she lied.
“Since when?”
“You’ve never touched me there, so you wouldn’t have known.” She winced. Wrong choice of words. Way too much inuendo for comfort. Change of subject time. “You know, if you hadn’t been distracting me, that dragon wouldn’t have got so close without me sensing him.”
“I wasn’t distracting you. I was just flying next to you.”
“Go fly next to someone else.”
“Back to the babysitting thing, are we?”
She still didn’t want to talk about that. Lyndi snapped her teeth together, catching her lip, and the metallic taste of blood hit her tongue.
“You know, I try to protect everyone on this team,” he pointed out, with a lingering hint of a chuckle. “It’s my job as beta.”
She should gratefully accept the reprieve and keep her mouth shut. “Are you laughing at me?”
“Not at you.”
“At what, then?”
Levi’s arm tightened around her. “I’m laughing at my own stupidity.”
“Which means what exactly?”
“Apparently no good deed goes unpunished when it comes to you,” he accused. “I’m trying to remind myself of that.”
“I don’t need your good deeds, either.”
A hiss escaped him. A sound of such frustration, so unlike Levi, that she tried to scoot forward slightly only to come up against the iron band of his arm.
“What do you need then?” he asked. “Because I can smell it all over you. Your need…it’s torture.”

The cousin of the High King, Lyndi Chandali has lived with the constant threat of being pawned off as a political prize. A rare, female-born dragon like Lyndi can’t truly mate—not in the way it counts. Which is why she’s kept her distance from a certain sinfully delicious Beta. Instead, she’s built a life for herself giving orphaned dragons in the Americas a home.

As Beta of his team of enforcers, Levi Rowtag is a fighter first, last, and always. His job is to protect—his team, the shifters in his territory, and the stubborn woman hell-bent on fighting with him at every turn. He knows from the moment they first meet what she’ll never accept—they are destined to be mated.

But with the kings at war, the enemy is now coming for Lyndi. Worse, he’s coming for her orphans, too. He’ll have no choice but to defy his king and go rogue if he has any hope of protecting them all…and finally claiming his mate.
Book Links: Amazon | B&N | iTunes | Goodreads |

Abigail grew up consuming books and exploring the world through her writing. She attempted to find a practical career related to her favorite pastime by earning a degree in English Rhetoric (Technical Writing). However, she swiftly discovered that writing without imagination is not nearly as fun as writing with it.