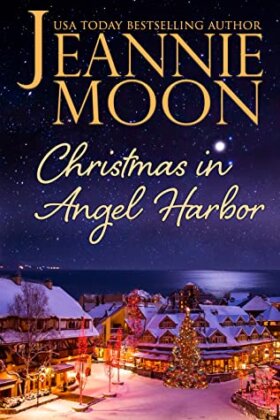 Twenty-five years ago, Jane Fallon put her rising career on hold to take over her family’s bookstore after the death of her father. Throughout the years, she’s transformed Angel Harbor Books into a place of comfort for her and her daughter, but when her landlord announces the building has been sold, Jane is faced with sudden uncertainty. If the bookstore is gone, what will she do?

As a young man, Dan Gallo couldn’t get out of Angel Harbor fast enough. Now a best-selling novelist, Dan returns home after a tragedy derails his career. His first stop is his favorite teenage hangout—the local bookstore. It’s almost exactly how he remembers it. But the girl who once worked there is now a beautiful woman whose smarts and spirit inspire him to write again, and open his heart to new possibilities.

With her world threatening to fall apart, Dan hopes that with the help of the town—and some Christmas magic—he can get Jane to see how important she is to the people of Angel Harbor…and him.

Excerpt. ©Jeannie Moon. Posted by arrangement with the publisher. All rights reserved.

USA Today bestselling author Jeannie Moon has always been a romantic. When she’s not spinning tales of her own, Jeannie works as a school librarian, thankful she has a job that allows her to immerse herself in books and call it work. Married to her high school sweetheart, Jeannie has three kids, three lovable dogs and a mischievous cat and lives in her hometown on Long Island, NY. If she’s more than ten miles away from salt water for any longer than a week, she gets twitchy.