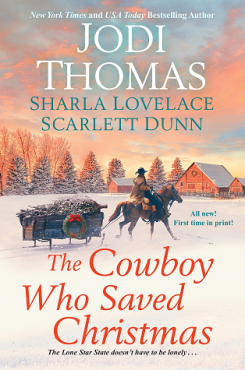 In these Texas-set stories of romance and adventure, the Civil War is over, Christmas is coming—and it’s time for three rugged fighters to become lovers…

Dispirited by war, when Trapper Morgan accepts a job hauling five little rich girls to Dallas, all he cares about is the money. He doesn’t expect they’ll awaken his spirit—or that their intriguing nursemaid, Carolina, will awaken his heart. And when danger strikes as Christmas Eve nears, he definitely doesn’t expect Carolina and the girls to risk their lives—for him . . .

THE MISTLETOE PROMISE by Sharla Lovelace

A catastrophic storm, an ailing herd, and a failing cattle ranch have left Texas rancher Josie Bancroft in danger of losing everything her father worked for. Still, she’d rather die than merge with her neighbor rancher Benjamin Mason, the man who broke her heart years ago, on Christmas Eve. As old sparks fly and secrets are revealed, however, Ben is determined to help Josie—and prove that this time around can be different. That the misunderstandings of Christmas past need not define their future…

Yellow Fever has hit Clint Mitchum’s Texas hometown and taken his father and siblings, leaving Clint ever more cynical. Racing homeward to be by his mother’s side, Clint finds only a note from her, asking that he help her caregiver, a young woman named Amelia. Assuming his mother has passed, in his grief Clint ventures out to search for Amelia—and finds the best of gifts—just in time for Christmas…

This review is for Father Goose by Jodi Thomas:    Trapper Hawkins became a soldier at seventeen, fighting for the south in the Civil War, becoming adept at shooting, tracking, and spying.  Now, at twenty four, the war is over, and he has nothing and no prospects.  He’s a fair gambler, so he’s able to survive by playing in the occasional card game.  In this particular game, the stakes are highly unusual.  His opponent has bet his upcoming job, one that will pay the whopping sum of five hundred dollars.  Trapper wins, and is now responsible for escorting five young ladies from school to their home near Dallas in time for Christmas.

Emery Adams has been abused and forced to work long hours, with all her pay going to her cruel father.  Any attempts at escape will result in a beating.  Emery has squirreled away what small amounts of cash she was able to hide from her father, and when an opportunity presents itself, she’s quick to take it.  Emery found an abandoned suitcase with some ladies’ clothing inside, and disguises herself as a widow, and takes off to purchase a ticket out of town.

Trapper has met the girls he is responsible for escorting home, but their nurse won’t release them to his custody until they have a chaperone / caretaker.  As Emery is passing by, Trapper implores her to pretend to be their hired nanny, but Emery wants to make the deal real.  Trapper agrees, and they set off for Dallas — Trapper, Emery, and the girls, ranging in age from four to thirteen.

Trapper knows this is not going to be an easy journey.  There are going to be some rough roads, unpredictable weather, and the threat of attack from thieves, or even kidnappers.  This group of travelers somehow forms a strong bond of mutual respect and affection.  When the danger comes to pass, Trapper is willing to lay down his life for his charges.  But these ladies are no shrinking violets.  Having grown up on a ranch, the girls know how to shoot and protect themselves.

FATHER GOOSE is a warm and entertaining story, with Trapper and Emery starting with nothing, yet finding love and hoping for a future.  The sisters are truly delightful, unspoiled, and each endearing in their own way.  Their journey has moments of tenderness along with the hardships, and is a pleasure to read.  Perhaps Christmas will bring a greater gift to Trapper and Emery than they could ever have imagined.    ~Rose